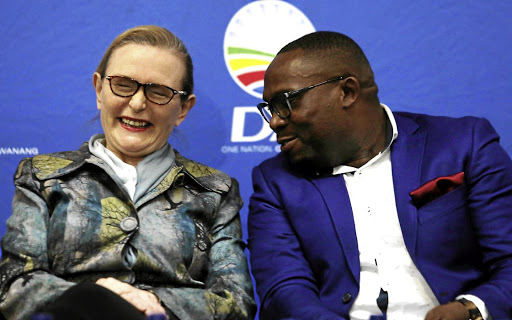 Bonginkosi Madikizela, the provincial leader of the Western Cape, has objected to remarks by his close ally and DA federal leader Helen Zille on racism in SA.
Image: ESA ALEXANDER

The fallout over Helen Zille's recent remarks that "there are more racist laws today than there were under apartheid", has seen black party leaders increasingly speaking out against her including some of her close allies.

The DA leadership is under mounting pressure to take action against Zille who has a penchant of causing a social media storms with controversial comments on colonialism and apartheid.

Without mentioning Zille by name, Madikizela yesterday told Sowetan that he "fundamentally" disagreed with her remarks.

"When people are saying today's laws are more racist than apartheid, I fundamentally disagree with that because apartheid racist laws empowered mostly white people," Madikizela said.

"We have laws in SA that were meant to empower black people but they are not.

DA appoints CEO who is 'passionate about freedom and diversity'

The DA has appointed Simon Dickinson as its new CEO, the party announced on Friday.
News
1 year ago

Madikizela has joined a long list of black leaders who have strongly come out against Zille in the past week, including Gauteng leader John Moodey, MPs Phumzile van Damme and Siviwe Gwurube as well as KZN MPL Mbali Ntuli.

They all slammed Zille for her remarks which have since been referred to the party's disciplinary body, the federal legal commission by two senior party members Khume Ramulifho and Hlangani Gumbi.

Madikizela said that people were entitled to their own "truths" but he said that he did not believe Zille's views should be gagged in a constitutional party such as the DA.

"[FW] De Klerk did not take a decision to unban liberation movements or release Mandela because he's got a good heart. We must disabuse ourselves from that.

Two DA public representatives have filed formal complaints against the chairperson of the party's federal council, Helen Zille, over her tweets ...
News
1 year ago

Zille on Saturday stuck to her guns in a lengthy WhatsApp message sent to DA leaders in which she said that given the platform she would be able to back "chapter and verse" her claims about De Klerk and apartheid laws.

She told party leaders that she had written two pieces meant to be published by the Rapport and PoliticsWeb but interim leader John Steenhuisen has requested her not to publish them.

"I understand the perspective from his point of view at this particular time," Zille said.

She said she was writing a book where she believes "it will be possible for me to make the case that South Africa is today the most racially regulated country on earth (just as we were under apartheid) in the name of non-racialism".

"The analytical framework within which much of the world is currently functioning, has changed so dramatically, that non-racialism, once a noble goal, has itself become defined by as racist."

Although it was not immediately clear when the FLC was expected to report back, several federal executive members including Madikizela and Makashule Gana said they would not like to get into the merits of the case as they were expected to be impartial during its hearing.