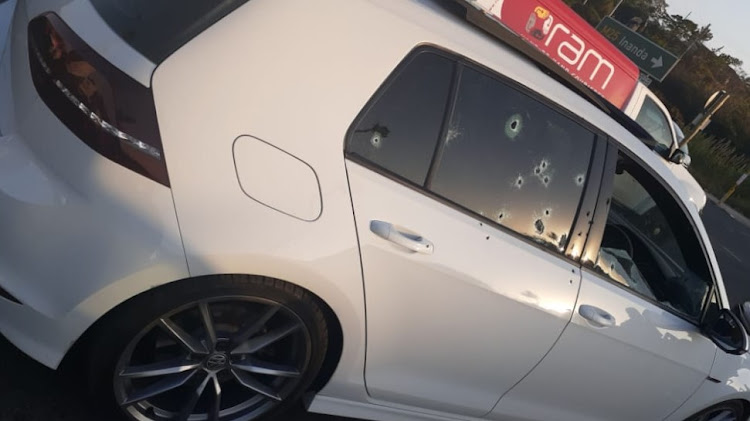 The bullet-riddled VW Golf 7 in which two men were shot dead and another injured on Monday.
Image: Supplied

Two men who were shot dead on Monday in a drive-by shooting on the R102 bridge near Duffs Road, north of Durban, were allegedly wanted for murder and attempted murder.

Pictures and videos of the gruesome scene were circulated on social media, showing the lifeless body of the driver and his passenger, whose identities are known to SowetanLIVE's sister publication TimesLIVE.

"On their arrival they were shown the bodies of two men lying inside the vehicle with multiple gunshot wounds to the head and body. The third victim was grazed by a bullet on the head and was taken to hospital."

A KwaZulu-Natal taxi driver was shot dead and three teachers left critically injured after their vehicle came under heavy fire near Wartburg, outside ...
News
1 year ago

The men, who were in a white VW Golf 7 with no number plates, were believed to have been travelling from Bridge City in KwaMashu to KwaDabeka when someone in an unknown vehicle opened fire on them.

Mbele said the shooting victims were allegedly wanted for murder and attempted murder.

"It is alleged the deceased were involved in the KwaDabeka murder and attempted murder on February 8 2020 when three victims were shot by unknown people.

"A 30-year-old sustained multiple shot wounds on the body and was certified dead at the scene," she said.

Initial information suggested the shooting on Monday was related to taxi rivalry but  police could not confirm this, stating that investigations are ongoing.