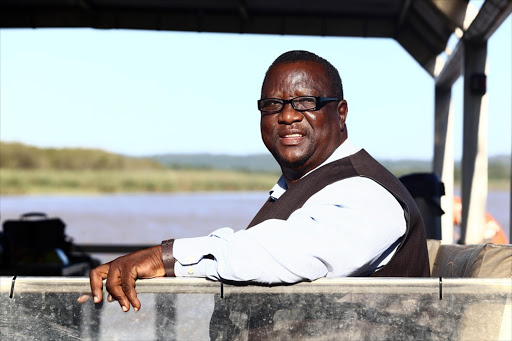 Philip Mkhwanazi, photographed by the Sunday Times in April 2017, was gunned down in an apparent hit in northern KZN on Monday.
Image: Thuli Dlamini

An ANC councillor and induna (headman) of a northern KwaZulu-Natal village was gunned down in a suspected hit on Monday morning.

Philip Mkhwanazi, the induna of Khula village in the Dukuduku reserve, 5km outside St Lucia in northern KwaZulu-Natal, died in a hail of bullets about 11am fired by two unknown men who had spoken to him moments before they opened fire.

Police spokesperson Col Thembeka Mbele said Mkhwanazi had been near his home, standing under a tree, while two men repaired his vehicle nearby.

“He was in his village with two people who were repairing his car. Two unknown men approached him on foot and said they wanted proof of residence, because they wanted to open an account at the bank.”

Seven men found shot in the head in Durban homestead

Police found the bodies of seven men who had been shot in the head in a homestead in eMsahweni in KwaMakutha, south of Durban, on Wednesday night.
News
1 year ago

Mbele said it was alleged that Mkhwanazi told the men to come back at noon because the person dealing with accounts was not in the office.

“They asked him if he [Mkhwanazi] would be there at 12 and the victim confirmed that he would. The men then pretended as if they were leaving but then suddenly opened fire on the victim.”

“The suspects made off with two of the victim's cellphones. A case of murder is being investigated,” he said.

A source with knowledge of the incident said the men shot Mkhwanazi with 9mm pistols.

“He was shot all over his body more than 20 times,” said the source.

In 2017 the Sunday Times reported how Mkhwanazi had gone from earning a measly R35 a fortnight to pocketing R800,000 a year through operating two commercial boats in the St Lucia estuary, as well as offering accommodation and a Zulu experience to local and international tourists at his Veyane Cultural Village — listed as a popular destination on KZN Tourism's official website.

“We appeal to anyone with information on crime to contact us on our Crime Stop number 08600 10111 or via the SAPS MySAPS app. Callers may remain anonymous and all information will be treated with confidence,” added Mbele.

Mkhwanazi's murder comes just two weeks after IFP councillor and Dukuduku community leader Thengezakhe Maphanga was shot 28 times by unknown gunmen at his homestead in the Nyamazane area in the Dukuduku reserve.

Police constable killed in gun battle with 'hijackers' in Mpumalanga

A police constable was shot dead after a car chase with suspected hijackers in Kwaggafontein, Mpumalanga, at the weekend.
News
1 year ago