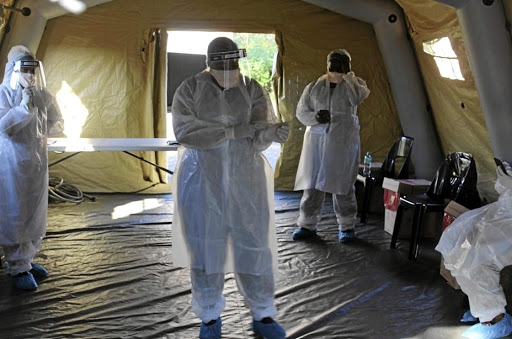 Medical team from the SA National Defence Force inside a temporary military Covid-19 testing and screening facility set up at the Pan African Mall in Alexandra yesterday. / SANDF Communication

Two hundred medics from the SA National Defence Force have joined other public health professionals in the daily Covid-19 mass screenings and testing across the country.

The army's primary healthcare has been roped in as the country intensifies Covid-19 screening and testing, the SANDF said yesterday.

SANDF joint operations division spokesperson Capt Jaco Theunissen told Sowetan yesterday their medics, who have been divided into 39 teams in nine provinces under the command of the joint operations centre, was led by the provincial departments of health.

Theunissen said officers, who have joined the mass screening and testing operations in the past week, were deployed depending on the need identified by the departments.

"What the teams consist of is doctors, nurses and ancillary medical staff... there's no specific given number per team, it can be four, five or eight [per team]," Theunissen explained.

He said their medical professionals were on the ground to boost and assist the department of health's efforts.

"They [SANDF medics] are guided by the provincial joint operations centres on where to go and do mass screenings, scanning and testing depending on the requirements from the department of health."

Theunissen said the teams would work from temporary military tent structures which would be set up in areas where they were required to assist.

"We have inflatable mobile tents which we can move around wherever the requirement is, they'd be a facility where people can be screened under roof where there's no static facility available."

Yesterday, one of the military medics team was deployed to the Pan African Mall in Alexandra, northern Johannesburg, which is in one of the most-affected regions in Gauteng.

North West health MEC Madoda Sambatha said they really needed assistance from the army's military personnel as some of the health professionals in the province were already in isolation.

Last week, the province announced that 12 health professionals, both in public and private healthcare, had tested positive for Covid-19.

"... the availability of the South African Military Health Services will close the gap," Sambatha said.

Gauteng health MEC Bandile Masuku's spokesperson Kwara Kekana said: "The Gauteng department of health is happy about improved intergovernmental relations across all spheres of government in the fight against Covid-19."

Covid-19 screening, testing on track thanks to Transnet health train

The Transnet Phelophepa health-care train will not only boost Covid-19 screening and testing but will also provide assistance in psychology, general ...
News
1 year ago

South Africans have been given a seven-day window to travel beyond provincial borders during level 4 of the lockdown.
News
1 year ago

Brigadier Hangwani Muluadzi said education department employee Kgotso Mooketsi, who had a pending charge of armed robbery, had been arrested in ...
News
1 year ago
Next Article