Cosatu calls for moratorium on retrenchments 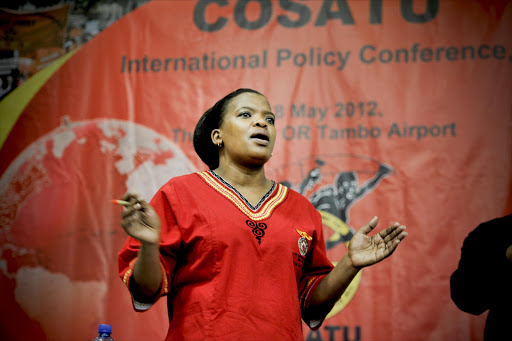 Cosatu President Zingiswa Losi the said the trade union federation could not allow government's relief and stimulus packages to be freely given to employers so 'they can take us back to our 'normal' situation'. File photo.
Image: Photo by Gallo Images / Foto24 / Lerato Maduna

Cosatu president Zingiswa Losi has called on government to impose a moratorium on retrenchments in the private businesses it bails out during the Covid-19 pandemic.

Losi made the call during her May Day address on Friday.

“If our taxpayer’s money is going to be used to bail out and help businesses, we need all those companies that are going to receive the money to agree to a moratorium on retrenchments,” she said.

She said Cosatu could not allow the relief and stimulus packages to be freely given to employers so “they can take us back to our 'normal' situation".

“Nothing has been normal for workers. Rampant exploitation and massive indebtedness are not normal.

“The fact that more than 13-million workers in South Africa live on less than R10 a day is not normal. Millions of South Africans can barely buy one loaf of bread. This is not normal, and we should not allow this to be normalised,” said Losi.

Is technology threatening jobs for humans?

The changing world of work has pitted workers against technology as SA's labour market begins to embrace opportunities brought by a new chapter in ...
News
1 year ago

The National Education, Health and Allied Workers’ Union (Nehawu) and the Congress of South African Trade Unions (Cosatu) in KwaZulu-Natal have ...
News
1 year ago

She said the trade union federation had observed with “shock and rage” how some employers were still acting to protect their narrow interests by taking decisions that maximise their accumulation even under conditions of economic crisis.

“Governments all over the world, including in this country, are still adopting policies that make it easier to take from the poor and give to the rich in the name of bailouts and tax incentives.

“Policies are developed and regulations deliberately ignored, or policy loopholes deliberately created to allow capital to amass more wealth and squeeze the working class further into a dark corner of poverty, unemployment and inequality,” said Losi.

She said Cosatu condemned attempts use the Covid-19 crisis as an opportunity for private accumulation.

“We must ensure Covid-19 is not used by employers and big monopolies to take away workers’ rights by retrenching workers, denying them their wages and their pensions,” she said.

She further called on government to announce an increase in its stimulus package to a minimum of R1 -trillion.

“Equally the private sector, the banks in particular, must come to the party.  The public and private sector investments must be coordinated to ensure they are geared towards productive economic investments that will spur inclusive economic growth and create jobs in areas like ports, railways, energy, health and broadband spectrum,” she said.