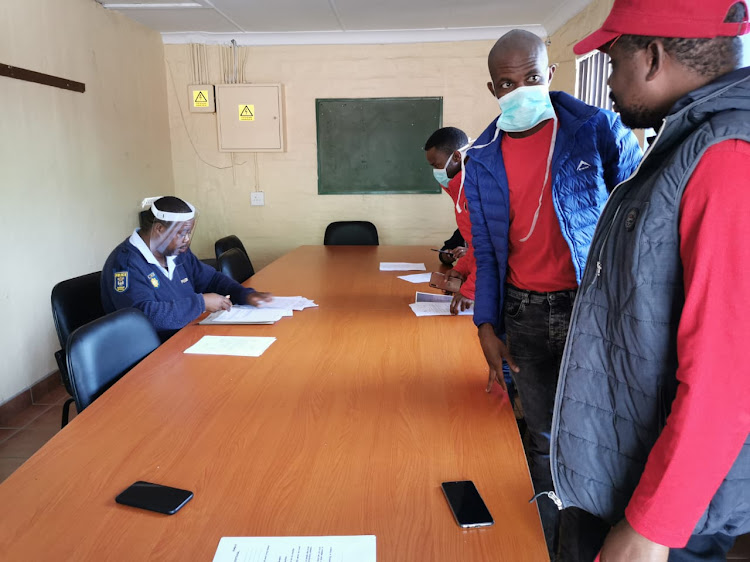 Representatives of the National Education, Health and Allied Workers union (Nehawu) open a case at the Hilton police station, outside Pietermaritzburg, on Thursday.
Image: Nehawu

The National Education, Health and Allied Workers’ Union (Nehawu) and the Congress of South African Trade Unions (Cosatu) in KwaZulu-Natal have opened a case against Hilton College for alleged contravention of the lockdown regulations.

This after the school said that workers who were planting trees as part of a national forestation programme were deemed essential and they had a permit to prove it.

“We have registered a case of non-compliance with the national lockdown regulations in terms of the Disaster Management Act,” he said. He said Nehawu had received allegations that the college — the most expensive and exclusive school in the country — had been “forcing” some of its employees to continue with operations in its forestry section.

“The leadership of Newahu made a surprise visit to the institution and found workers working in the field.”

He said the college produced a certificate. The union then referred the certificate to the department of employment & labour to determine its authenticity. Zulu said the school was not part of what is considered an essential service and had therefore “contravened the Disaster Management Act”.

Coastu provincial secretary Edwin Mkhize said some of its members had been asked to plant trees — something deemed as essential work by the college.

“One of our members said the college was getting workers to plant things such as trees — they wanted to know if that was essential. My advice was that they needed to involve the department of employment & labour and police,” he said.

The director of marketing at the school, Peter Sorrar, said the Hiltonian Society regarded any statement insinuating fraud, forced labour or a contravention of the lockdown on their part as baseless and defamatory.

“We are engaging our legal team to counter such accusations.”

Allowing school feeding schemes to open during lockdown could put the lives of children at risk, Gauteng premier David Makhura warned on Tuesday.
News
1 year ago

Sorrar said the society was aware of allegations and of plans to lodge a criminal charge related to employees who were working in the forest.

“It's specifically around forestry operations, the planting of wattle trees which are used in the general timber industry. The operation is done through Forestry South Africa,” said Sorrar.

“The Hiltonian Society is in full support of lockdown protocols set out by the national government and the society has been strictly observing all regulations. Hilton College has not had learners on campus since March 18, and learners have been keeping up with their schoolwork from their homes, by engaging with teaching staff online.”

Sorrar said forestry operations were deemed an essential service as forestry helped secure the provision of other essential goods and services, such as food production, medicines, medical and hygiene products, cleaning products and agricultural and energy production.

“The minister of environment, forestry and fisheries, Barbara Creecy, reaffirmed this in the national live broadcasts, which took place on March 24 and April 3 2020.”

He said to support the government’s request that such services persist, The Hiltonian Society continued forestry operations but had taken care to limit the use of labour as much as possible.

“All staff have been trained in precautions and hygiene using material developed and supplied by the department of health. It has been made clear to staff that they are not obliged to come to work and no disciplinary action will be taken against those who choose to stay at home.”

Sorrar emphasised that the Hiltonian Society was confident that its actions were legal and that the farm was playing an important role in supporting the nation’s response to the Covid-19 pandemic.

Call for school feeding scheme to continue under lockdown

Activists and education and children’s rights organisations have called on basic education minister Angie Motshekga to revive the school feeding ...
News
1 year ago
Next Article