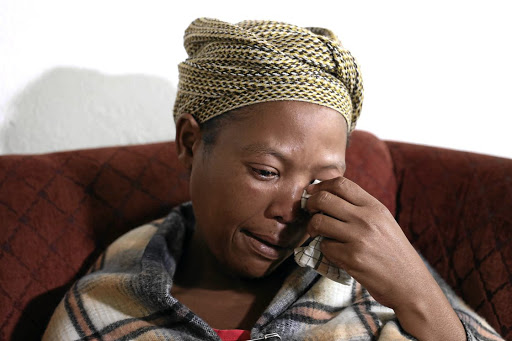 Nandi Sibeko, the distraught mother of Siphiwe Sibeko, the 14-year-old girl who went missing and was found killed in Emndeni, Soweto. A second suspect was arrested in her murder.
Image: Veli Nhlapo

A second suspect has been arrested in connection with the murder of Soweto teenager, Siphiwe Sibeko.

“This brings the total number of suspects arrested to two. These are the suspects who allegedly killed the 14-year-old girl from Dobsonville,” Makhubele said.

On Tuesday, a 22-year-old man was arrested in connection with the teen’s murder.

“The suspects will appear together today 09 April 2020 in Protea magistrate,” Makhubele said. Sibeko was raped, and her mutilated body was found dumped raped in Mndeni last Friday. This was after she went missing on Thursday while on her way to a tuckshop in Dobsonville.

Gauteng police have arrested a 22-year-old man in connection with the murder of 14-year-old Simphiwe Sibeko.
News
2 years ago

Nandi Sibeko, the teen’s mother could not contain herself on Sunday when she described the state in which her daughter was discovered after she went missing.

“The only thing that we could recognise her with was her clothes - pink takkies and grey trackpants. But we could not recognise her because they injured her badly,” Sibeko said. The distraught mother said the family went to the scene where Siphiwe’s body was found and saw the amount of blood her daughter lost.

“It was everywhere, it was even on the trees - we don't know what kind of human being could do something like this,” Sibeko said.

She described the grade 9 learner as a bright spark who wanted to study chemical engineering after she matriculated.

“My daughter was smart, she was a head girl at her primary school and a finalist during interviews at Oprah Winfrey Leadership Academy for Girls. She was intelligent and reserved. I don't understand why someone would have done something like this to her,” Sibeko said.

A 22-year-old man has been arrested for the murder of the 14-year-old girl whose body was found dumped in Soweto.
News
2 years ago

“When she left the house she asked her grandmother whether she wanted any snacks because she was going to the tuckshop. We grew worried when it became late and she had not returned. On Friday morning we went to her friend’s house in Mndeni to find out if she was there, but did not find her because she is not a child who does not come home and doesn't like going out much and only has one friend,” she said.

She said a police officer fetched them on Saturday morning and took them to a government mortuary where Siphiwe’s body was kept.

The officer told Sibeko and her family that they discovered a body of a woman who was between the ages 14 and 25. “My sister and mother went in to identify, I could not bear to go in there,” Sibeko said. “We are pleading with men out there to stop killing women and children. This gender-based violence must come to an end we are being slaughtered.”

Simphiwe Sibeko was a good child who spent a lot of time indoors and was a top achiever at school, says her grandmother Joyce.
News
2 years ago

Teen raped, slain and mutilated
News
2 years ago
Next Article