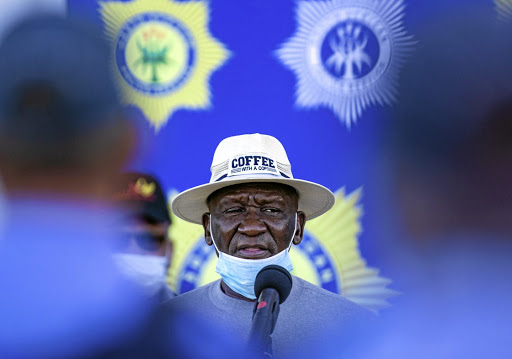 Police minister Bheki Cele has called on the police and soldiers to "push" people who are found galavanting on the streets and drinking alcohol back into their homes.

Speaking in Mbalenhle in Secunda, Mpumalanga, yesterday, Cele said he was informed that the people of Mbalenhle were not listening or adhering to the regulations because they hold parties drinking alcohol.

"Mpumalanga you are facing several challenges, you are not only neighbouring several provinces, but you also have international borders.

"This means you have to be vigilant more than other provinces. Some of the people you receive might be from other countries that are more affected," Cele said.

"You need to do all the measures provided, quarantine people, check people, don't let them galavant, and this township has got a tendency of not listening that's why we are here."

"When people don't want to listen we must make them listen, keep the law... This thing of thinking it is only the forces that must behave extra should come to an end... You have no reason to galavant here... when they galavant you push them to their houses. If they don't listen you push them because we are not playing here."

He said Spain has lost 800 people in 24 hours and SA can't allow that to happen here.

He labelled people who don't adhere to the lockdown regulations as "brutal", not the police or soldiers. "These people are brutal here, they galavant, go out; that is brutal because you go out and bring the virus to the house.

"Here 1,295 people have been arrested which means they don't listen... we should be all doing right because of the benefit of humankind."

He said 17,000 members of the police and the SA Defence Force have been deployed to Mpumalanga. Cele alslo went to Emalahleni. Mtshweni-Tsipane said the province was happy most people are adhering to the lockdown regulations and those who don't listen will face the police.

Police minister Bheki Cele has announced a decrease in serious violent crimes during the first week of the national lockdown.
News
1 year ago
Next Article