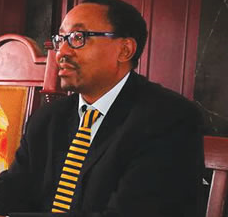 eThekwini city manager Sipho Nzuza was asked to submit a letter to the municipality about why he should retain his position while he is facing charges.
Image: ethekwini.gov.za

eThekwini municipal manager Sipho Nzuza has been suspended after being placed on special leave amid corruption charges.

Nzuza was granted two weeks' special leave after his appearance in the Durban commercial crimes court in March. Deputy city manager Sipho Cele was temporarily appointed in his place.

The municipal manager was asked to write a letter to mayor Mxolisi Kaunda and provide reasons why he should not be suspended.

Mayoral spokesperson Mluleki Mntungwa said the letter was received by the mayor, however, council took the decision to suspend the embattled city manager.

“Following his arrest he was granted special leave until last week when council took a decision to suspend him pending the outcome of an investigation,” Mntungwa said.

Nzuza handed himself in on March 10 and joined former eThekwini mayor, Zandile Gumede, as the 17th accused in an ongoing tender corruption case related to the awarding of work to contractors for a 2016 Durban Solid Waste tender. He faces charges of fraud, corruption and maladministration.

During his last appearance it was revealed that the amount of irregular expenditure due to collusion between senior eThekwini officials and service providers around the tender stood at R430m.

Six Mpumalanga traffic police officers between the ages of 28 and 43 have been arrested on charges of corruption and defeating the ends of justice.
News
2 years ago

Ipid has recorded 38 complaints against the conduct of the police since the 21-day lockdown began on Friday morning.
News
2 years ago
Next Article