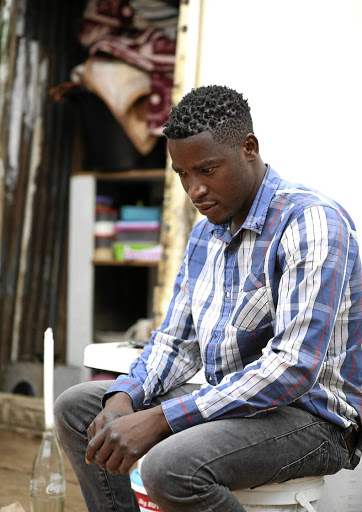 Carlos Chirindza spent most part of yesterday locked in his shack, mourning his mother who was being buried in Mozambique.

The travel ban under the national lockdown had made it difficult for Chirindza, 29, who lives in Daveyton on the East Rand, to travel to his home country.

"My mother passed away on Sunday morning and as soon as I heard the news, I packed my clothes and rushed to the bus station. However, I was told there were no buses and taxis going home due to border restrictions in light of the lockdown," he said.

The heartbroken Chirindza said he was emotional and hurt that he could not bid his mother goodbye.

Chirindza said his two siblings were also unable to go home because of the restrictions. He said he did not try to get a permit and his family had to proceed with the funeral without them yesterday as "Mozambique was preparing for a lockdown as well".

Department of transport spokesperson Ayanda Allie-Paine said no one was allowed to travel from one province to another.

"However, the minister of cooperative governance and traditional affairs Nkosazana Dlamini-Zuma may change regulations for those who need to bury their loved ones. As it stands, people can get a letter from a hospital and take it to the police station to apply for travel permit," she said.

Unlike Chirindza, a man who only wanted to be identified as Tebogo was lucky to get a travel permit from a funeral parlour in Limpopo.

He said when he heard of his mother's passing on Monday, he immediately went to the Hillbrow police station to apply for a travel permit.

Tebogo said it proved to be the most difficult thing he has had to do as he was sent from one police station to another. In every police station that he went to, he was greeted with a big bold sign that read: "No permit is issued for movement from the police station".

SA was only 27 days into its coronavirus drama on Tuesday when the health minister said there was a glimmer of light at the end of the tunnel.
News
1 year ago

Hundreds of Gauteng commuters flooded Johannesburg's Park Station yesterday in a mad rush to leave the province ahead of the lockdown.
News
1 year ago

"I had my mother's death certificate with me when I visited the police stations, but my pleas fell on deaf ears. Those police officers just did not care and all I wanted was to go and say my last goodbyes to my mother.

"Seeing that time was not on my side, I had to call a funeral parlour in Limpopo and they emailed me the permit and I was able to travel home. How does one heal from losing a parent if its going to be difficult to even bury them?"

"The death certificate will serve as a travel permit because currently we don't have a mechanism when it comes to that," Mtshali said.