Army calls for calm as soldiers seen in Johannesburg streets 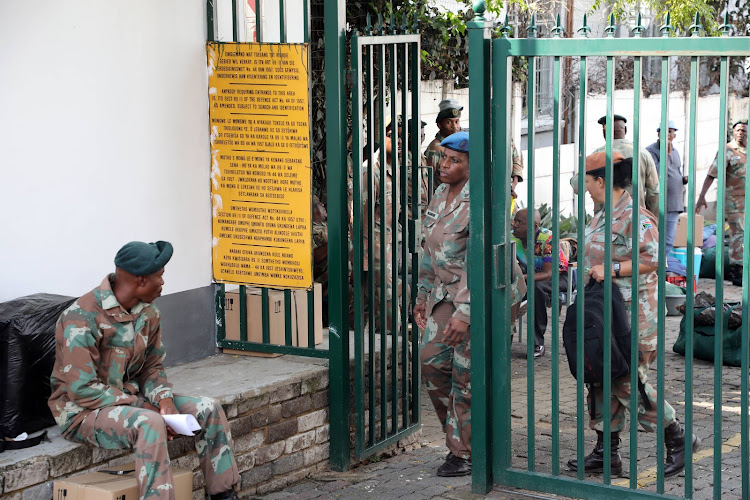 The SA National Defence Force (SANDF) has called for calm after soldiers were seen in the streets of Johannesburg.

The SANDF said this in a statement posted on Twitter on Monday evening.

"The SANDF would like to confirm that the soldiers seen in Johannesburg is part of the SANDF's mobilisation phase as part of normal preparations for support to government and it is not a deployment as speculated.

'The SANDF would like to appeal to the public to remain calm," read the statement.

This comes as South Africa's confirmed cases of coronavirus hit the 400 mark on Monday ahead of President Cyril Ramaphosa's address to the nation in the evening.

In a memo, however, which has been circulating on social media, the SA Army Infantry Formation (foot soldiers) have been requested to mobilise and prepare for deployment across the country under the operational command of nine regional command centres.

Everyone studying full time with a Standard Bank student loan will receive a three-month payment holiday at 0% interest and with zero fees.
News
2 years ago

Government has moved to clarify the ban on booze sales, particularly on Saturdays.
News
2 years ago

"The SA Army Inf Fomn (SA Army Infantry Formation) prepare, provide and sustain one sub-unit per province to deploy under operational command of nine regional J Tac HQ and in support of other state departments from 23 March until (coronavirus) outbreak is contained," the SA Army memo stated.

It was organised chaos on Jan Smuts Avenue on Monday afternoon outside the Rand Light Infranty building as memebrs were seemingly getting ready for deployment. The RLI is an infantry (foot soldiers) regiment of the South African Army.

When Sowetan arrived, there was an army truck outside the building, with people dressed in fatigues fetching bags from the back of a white bakkie.

Other reserves were walking into the property while a woman in a mask was helping others with their luggage.

More camoflauge-clad reserves were chatting and seated outside the gate as if waiting for something, while a few were carrying their bags to a nearby minibus taxi and another left in an automobile.

Although it was not clear what they were doing at the barracks, those who were approached refused to answer questions posed to them.

A "Capt Khanyile" redirected the Sowetan to Pretoria for answers to their questions. Motorists were clearly entranced with the unusual activity.

A Butterworth Hospital nurse has been arrested for allegedly stealing four boxes of face masks, according to the Eastern Cape health department.
News
2 years ago

A white Porsche slowed down as the driver took a picture of the reserves, but no one stopped. The mood of the reserves was somehow upbeat though seemingly alert.

The last time the president deployed the army to assist with law and order was in the Western Cape last year following killings in gang-infested Cape Flats.

The defence force was expected to stay in crime-hit parts of Cape Town till March 31.

This deployment, however, was aimed at giving support to the South African Police Service in the enforcement of the newly gazetted regulations aimed at slowing down coronavirus infections, according to the memo.

"Duration of the operation is 21 days. However, the period might be extended for three (3) months," the memo stated.

Several army units in eight provinces except Limpopo have been asked to prepare and provide units that would be deployed from Monday, March 23rd.

Two units will be deployed in Gauteng, which is the hardest hit province with more than half of all comfirmed cases of coronavirus.

One unit will be based in Tshwane while another would be based in Johannesburg, according to the memo. The memo also stated that as a result of the deployment, all leave have been cancelled with immediate effect.

Telkom ramps up measures in anticipation of coronavirus lockdown

Network operator Telkom has announced pump R15m to bolster the country's primary healthcare in the battle against Covid-19.
News
2 years ago

Mercedes-Benz South Africa (MBSA) will continue operations at its East London plant despite one of its employees testing positive for the coronavirus.
News
2 years ago
Next Article