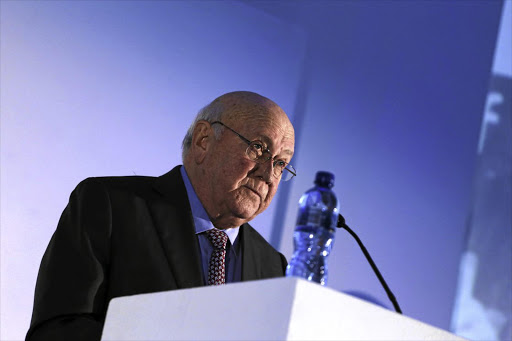 The EFF has undertaken to spearhead a social movement to have former president FW de Klerk's Nobel Peace Prize revoked - but is this possible?

Dali Mpofu, national secretary of the EFF, asked South Africans on social media to join a “non-partisan” citizens' campaign in which the Nobel Foundation would be approached to consider the request.

“That's it! Enough is Enough! If you think apartheid was a crime against humanity, please join me in a non-partisan citizens' campaign to approach the Nobel Foundation to take back the Nobel Peace Prize from FW de Klerk. At 10,000 retweets we launch formally! Let's go!” tweeted Mpofu.

The De Klerk Foundation on Friday released a statement responding to the EFF's calls to have him removed during the state of the nation address (Sona).

De Klerk was adamant that apartheid was not a crime against humanity, explaining that the UN convention declaring this contained “political initiatives of the Soviet Union”.

On Monday, however, De Klerk apologised and unconditionally withdrew the statement issued by his foundation.

According to the Nobel Foundation, which manages the finances and administration of the Nobel Prizes, once awarded, the prize cannot be revoked.

“No appeals may be made against the decision of a prize-awarding body with regard to the award of a prize.

The foundation added that a prize-awarding body may, after due consideration in each individual case, permit access to material that formed the basis for the evaluation and decision concerning a prize, for purposes of research in intellectual history.

“Such permission may not, however, be granted until at least 50 years have elapsed after the date on which the decision in question was made,” it added.

The Nobel Prizes started in 1901 and have become among the most prestigious awards in the world.

The Desmond & Leah Tutu Legacy Foundation has called on the FW de Klerk Foundation to withdraw its statement on Friday that apartheid was not a crime ...
News
1 year ago
Next Article