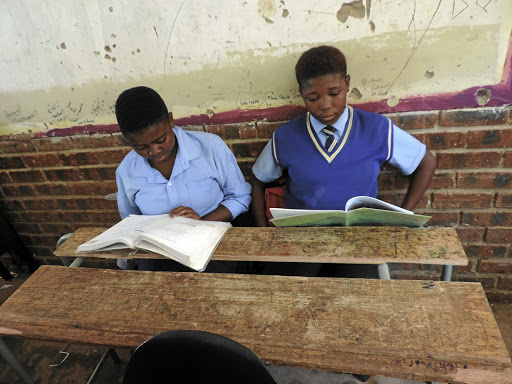 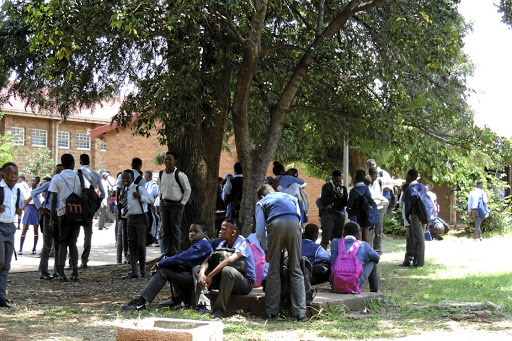 Two schools in Mamelodi, east of Pretoria, are in a dire state of disrepair - with ceilings falling off, blocked toilets and broken windows.

The conditions at Kutumela Molefe Primary School and Modiri Secondary have sparked protests by parents and pupils.

Parents shut down Kutumela Molefe on Thursday last week, keeping pupils at home as they demanded an urgent intervention by the provincial department of education.

Pupils at Modiri Secondary abandoned classes and went on a week-long go-slow last week, demanding that infrastructure problems at the school be attended to.

When Sowetan visited Kutumela Molefe Primary this week there was a strong urine stench from poorly maintained mobile toilets.

Ceilings in several classrooms were falling off, with a number of windows broken. Most classrooms looked like they had not been cleaned for days.

Parents said Gauteng education MEC Panyaza Lesufi promised them that a new school would be constructed to replace their old one which had already started falling apart when the MEC visited last year.

At Tholimfundo Primary School in Protea Glen, Soweto, pupils are subjected to learning in old mobile classrooms with no doors or proper flooring.
News
1 year ago

Teachers are battling to cope with their workloads at Masibambane Secondary School in Bloekombos, Kraaifontein
News
1 year ago

Although schooling was back under way at Modiri, most pupils were hanging about and idling outside classrooms during school hours.

Most toilets were blocked, and ceiling boards had collapsed in several classrooms.

At Kutumela Molefe, a big group of angry parents had ordered everyone out and blocked the gate, preventing anyone from gaining entry onto the school premises.

Mobile classrooms apparently delivered in 2017 had never been used and criminals had started stripping them bare, stealing items such as window frames.

At Modiri, an incomplete science laboratory built last year has seemingly been abandoned before construction was completed.

There is litter across the school premises and most toilets were blocked and unusable, some spilling raw sewage.

Parent, Oupa Mahlangu, said they won't allow their children to attend school in conditions which were not conducive for teaching and learning, especially for young primary school pupils.

"I'm shocked by the conditions my kids are learning under at Kutumela Molefe Primary School... no kid deserves to learn in such a bad condition," said Mahlangu.

Another parent, Mahlodi Papola, 38, said: "All I want is a safer environment for my kids when they are at school at all times and what I saw at school is horrible."

Parents of Kutumela Primary vowed that learning will be stopped until the department comes to the school and gives them answers.

Lewis Carter of the Congress of SA Students (Cosas) in Tshwane said Modiri Secondary has been neglected for far too long by the department.

"It's just abandoned, it's like a dumping site where all rubbish is being dumped and the condition of the school is unbearable. No one will learn in those conditions," Carter said

Pupils said their old desks break on a regular basis.

"I share a desk with my classmate, sometimes the top wooded structure falls onto the floor while we're busy writing and I must pick it up and it is very difficult to write on it," said grade 8 pupil Nomcebo Masombuka, 14.

"I don't have a choice because there is no proper furniture and sometimes I come to school very early just to book a proper desk first."

"The report will assist on our intervention, that is, what to fix and how. I encourage learners to always follow necessary channels to raise concerns."

Schoolgirl killed by teacher's car in Soshanguve, another raped in Tembisa

The Gauteng education department has lost yet another learner, while in a separate incident on Wednesday, a mentally disabled girl was raped.
News
1 year ago

Joost Zeelie is the director and owner of Hanniel Primary in Nigel, a private school which has not been registered with the Gauteng education ...
News
1 year ago

How a grade 10 learner jumped to his death

Gauteng MEC for education Panyaza Lesufi has given details about how a grade 10 learner from Ferndale High School jumped to his death.
News
1 year ago
Next Article