How a grade 10 learner jumped to his death 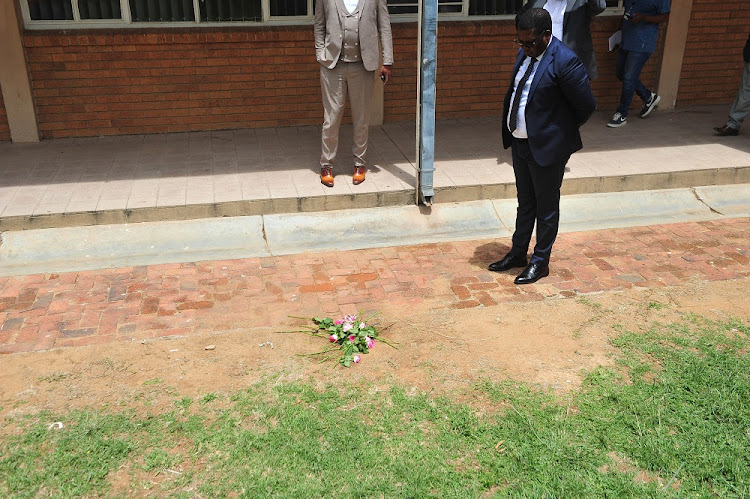 Gauteng MEC for education Panyaza Lesufi stands at the spot where 16-year-old Reuben Kelebogile Molopyane inexplicably jumped to his death on Tuesday morning.

Gauteng MEC for education Panyaza Lesufi has given details about how a grade 10 learner from Ferndale High School jumped to his death.

Lesufi on Wednesday visited the school in Joburg north where he provided details about the learner’s death.

“There’s CCTV footage of what transpired before the incident - I didn’t watch it because I dont think I’ll be able to cope. But I am told that the learner ran out of a classroom on the third floor and jumped over the barrier,” Lesufi said.

He said the incident occurred at around 9:30am while learners were changing classes.

He was speaking moments after the school’s principal led him to the classroom from which Molopyane ran out from before jumping.

He was also shown where he landed after his fateful fall.

Flowers were placed by learners and teachers on the spot the 16-year-old fell from.

“I’ve run out of words of comfort for the school and families. We are no longer visiting schools to determine whether learners are doing well, we are coming to prepare learners to accept death and how to deal with death at such a young age,” he said.

He said the department has dispatched all of it psychosocial teams to various families as the death toll of learners in Gauteng has risen to 12.

He was also speaking on the backdrop of another learner from Vereeniging who died after allegedly drinking poison.

She was rushed to the Charlotte Maxeke Johannesburg Academic Hospital, where she was certified dead on arrival.

"Unfortunately, it is unknown what prompted the deceased learner to commit suicide. The police are investigating circumstances surrounding this unfortunate incident," Mabona said.

A Grade 6 learner has died after falling from an eight-metre high ceiling in the school hall‚ the education department said. According to Western ...
News
4 years ago