'It turned our family upside down,' son of murdered cyclist says 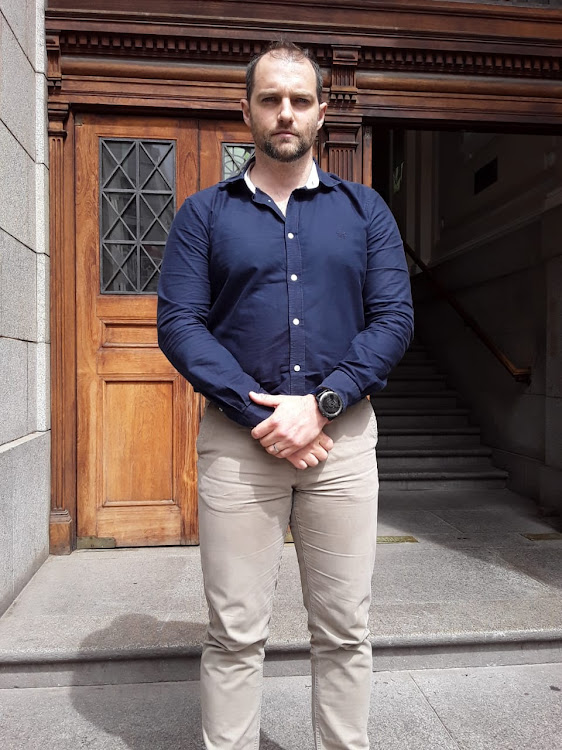 Robert McPherson, 36, testified in the double murder trial against Blessing Bveni, the man who allegedly murdered his father in 2018.
Image: Aron Hyman

Robert McPherson's mother Allyn turned away from the man accused of killing her husband of 47 years.

She whimpered, her shoulders pressed down by the weight of her grief, her head turned as if in hiding under her silver hair.

This was while prosecutor Christopher Burke read count 9 from the state's indictment of Blessing Bveni on the first day of the trial of the Zimbabwean citizen accused of murder and robbery.

"With the intent to force him into submission, [Bveni] assaulted Ian Stuart McPherson by stabbing him with a knife or similar sharp object and/or threaten to do him harm," read Burke.

According to the state, Bveni attacked McPherson with a knife on March 13 2018 near Brigantine Road in Sun Valley, Fish Hoek, before stealing his cellphone, watch, Garmin GPS, and mountain bike.

McPherson did not survive the attack.

Judge Ingrid Arntsen asked that Burke only read a summary of the alleged incident which claimed Ian's life, apparently in pity of his bereaved widow, who was being consoled by her son.

Bveni is also accused of murdering John Notten on January 28 2018 in the Silvermine Nature Reserve after attacking him and his wife.

All together, his victim count numbers seven people.

KZN man killed, tied up, wrapped in blanket and stuffed into bakkie

Police in mid-Illovo along the KwaZulu-Natal made a gruesome discovery on Monday when they found a body of a 23-year-old man bound by his hands and ...
News
1 year ago

Bveni on Monday pleaded not guilty to the 12 counts of against him: the two murders, one attempted murder, two assaults with intent to cause grievous bodily harm, four robberies with aggravating circumstances, an attempted robbery, and two contraventions of the immigration act including the use of a false passport.

Despite her grief, Allyn was more concerned about her son Robert, who finally testified on Wednesday afternoon after to a lengthy delay due to load-shedding.

He testified about the items that police Sgt Damon from the Fish Hoek police recovered and showed him after he flew back to South Africa from the UK the day after hearing that his father has been murdered.

They were mostly gifts from son to father: a Leatherman knife he bought him as a gift in in the US 10 years ago; a rugged Cat phone he bought in the UK; and the mountain bike he helped his father assemble via a video call from the UK.

Never recovered, however, was the Garmin wristwatch he gave his father after he returned from a combat tour in Afghanistan. "He wore it as a good-luck charm," said McPherson.

As Allyn sat outside the court, McPherson testified about the effect his father's death had on his family. His history as a military and law enforcement specialist did not prepare him for this, as he struggled to get through his testimony.

"It turned the family inside out. My father was the centre which held the McPherson family together," he said, apologising for choking up while attempting to fight back his grief.

"Within a week of this happening, their house was also burgled. I decided that I had to move my mother to the UK. She was getting distraught and it was not safe," he said.

"I had to quit my job and buy another property for my mother. It has taken up to now to get my mother stabilised and settled. It's the first time now that I've been able to get a job again."

McPherson now works as a consultant in Dubai, advising governments on how to optimise their military and law enforcement capabilities.

Police have arrested a suspect in connection with the mugging of a woman in Cape Town - video footage of which went viral on social media.
News
2 years ago

Bveni's Legal Aid attorney, Henk Carstens, then cross-examined McPherson about an allegation by Bveni that a private investigator hired by McPherson tried to bribe the accused.

McPherson said he hired Hans Linde with instructions to do a watching brief of the case and give him feedback, adding that he never asked him to speak to the accused.

Carstens read from an affidavit, apparently deposed by Linde, stating that he went to interview Bveni in Pollsmoor prison on two occasions "for possible reconciliation".

McPherson said he gave Linde no such instruction but added that he trusted him.

"The accused says Linde went to see him in Pollsmoor twice. The first time he went to threaten him. He stated: 'Something's going to happen to you, you're going to know why,'" said Carstens.

He said the instructions he got from Bveni might have been hampered by a difficulty in communication as the accused struggled with English.

However, Bveni indicated through the court interpreter that he agreed with the instructions, as read out by Carstens.

"On the second occasion, the accused alleges Linde tried to bribe him to admit to the offence," he said.

McPherson said he was not aware of either of these allegations.

The court adjourned after McPherson's testimony. The case was postponed to Monday, when Allyn will have to face her husband's alleged killer without the comfort of her son by her side, as he had to fly back to Dubai.

The McPhersons are originally from Zimbabwe but decided to move to South Africa when the political and economic situation in that country deteriorated.

'Cult' members on trial for murder
News
1 year ago

"He appeared in court as if he didn't kill a person. He didn't even show any sign of remorse and behaved like an animal."
News
1 year ago
Next Article