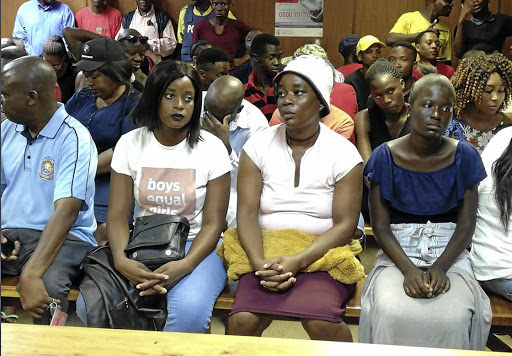 The man charged with the rape and murder of a college student has pleaded not guilty to all charges against him.

Aubrey Manaka, 28, appeared in the Morebeng magistrate's court for robbery, housebreaking with intention to rape, rape and murder of Precious Ramabulana, a Capricorn TVET student who was killed in her rented room in Mokomene, Botlokwa, outside Polokwane in November.

Magistrate Lebogang Raborife-Nchabeleng asked Manaka to stand up as she read out each count for him and asked him to plead.

Manaka, who appeared calm and confident, pulled the microphone towards his chest and pleaded not guilty to all the charges. Manaka's lawyer Zuwani Nenzhelele confirmed to the court that Manaka was not pleading guilty.

It also emerged yesterday that Manaka allegedly raped a four-year-old girl in February 2014.

Precious' mother Peggy Ramabulana also attended the court for the first time and sat next to other family members in the front row of the court.

The man accused of killing college student Precious Ramabulana, 21, has pleaded not guilty to all the charges against him, including the rape of a ...
News
1 year ago

After Manaka's appearance, Ramabulana was rushed to the vehicle after she became emotional. Precious' uncle Simon Ramabulana said: "She [Peggy] is in a process of recovering and now she relapsed. She said she felt like the incident is fresh in her mind. She is not coping at all."

The Ramabulana family has labelled Manaka a "remorseless criminal".

Simon said they were shocked that Manaka didn't plead guilty to the charges.

"His plea shows that he is a heartless criminal. We don't understand why he didn't plead guilty because there is an overwhelming evidence against him," he said.

He said Manaka should have pleaded guilty because he was found in possession of Precious' cellphone which was stolen on the night she was killed.

He said the family was optimistic that Manaka will go to jail for a very long time.

"With what the state has told us, we are hopeful that Manaka will be punished. We didn't even know that he has another rape charge which was recently added," he said.

Precious' friend Khulani Mohale, 21, said she would only find peace when Manaka receive a hefty jail term. "He took everything from me. Since Precious' death I'm lonely. I have no one to talk to because he took away my only friend."

Manaka's case was postponed for further instructions from the National Director of Public Prosecutions.

The man accused of the rape and murder of college student Precious Ramabulana will be tried for the rape of a five-year-old boy.
News
1 year ago

Just the other day it was Precious Ramabulana who the parents sent to a place of learning, only for her to meet her untimely death.
Opinion
1 year ago

A Limpopo man accused of several crimes, including the rape and murder of Capricorn TVET College student Precious Ramabulana, 21, has been ...
News
1 year ago
Next Article