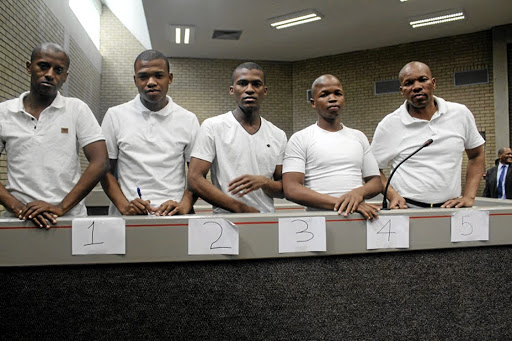 Two police officers who survived the Ngcobo police station massacre have described how they were caught in a fearsome firefight with members of an armed cult who killed their colleagues.

The officers were testifying in the Mthatha High Court this weekduring the trial of six members of the Mancoba Seven Angels Ministry.

The six men face charges of murder, attempted murder, conspiracy to commit an offence, possession of a firearm and defeating the ends of justice. The accused have all pleaded not guilty.

The Eastern Cape church was declared a cult by former police minister Fikile Mbalula amid allegations that church leaders were responsible for the deadly February 2018 attack on the Ngcobo police station that left five policemen and a former soldier dead.

The officers who testified were stationed at the Dalasile police station and responded to the attack on the Ngcobo police station, about 24km away.

Const Awonke Njobe, now based at the Mthatha organised crime unit, said he was on standby at Dalasile, while Warrant Officer Mvelisi Simoyi was the duty commander. They answered the call to assist their colleagues at Ngcobo.

"We were shot at with automatic rifles and pistols. There were more than three people who were shooting in our direction and we suspected that there were more.

They said that the gunmen were in three vehicles - one a marked police vehicle and the other two unmarked bakkies.

It was later discovered that the police van had been hijacked from two police officers who were killed, allegedly by the gang.

Njobe explained how he had managed to jump a fence but his colleague had caught his boot on the fence. Njobe was able to free him, and the two ran in different directions.

After the firefight had ended, the officers said they entered the police station and found two police officials shot dead inside the charge office.

The Mancoba Seven Angel's Ministries has lost another son to the authorities‚ with the arrest and detention of Ephraim Mancoba‚ 22.
News
3 years ago

Outside the charge office was a white Toyota Hilux containing the body of another officer in the driver's seat.

The bodies of two other officers were found near Nyanga High School on the R61 with their hands tied behind their heads. Both had been shot in the head.

Njobe said the two bodies were spotted by a Ngcobo court official who was jogging early in the morning.

"It was clear that they were not killed on the spot but were dragged and dumped there. They were apparently killed in an assassination," said Njobe.

"Seeing police officers killed, especially in [that] fashion, was a painful sight."

He said these officers had been on patrol.

The state is expected to call a total of 85 witnesses during the trial, which is set down for a month.