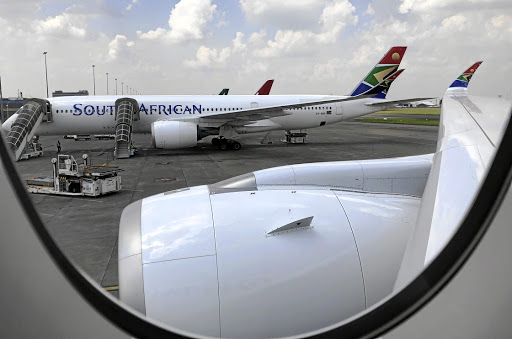 An SAA aircraft at OR Tambo International Airport in Johannesburg . The embattled airline cancelled a number of flights this week./Sumaya Hisham / REUTERS

The ANC wants long-term contracts worth billions of rand at SAA investigated amid concerns that they are draining the resources of the financially troubled national carrier.

SAA, through its subsidiary SAA Technical, has a number of lucrative contracts that date as far back as 1999 and which either have no end date or are regularly renewed without going out to tender.

Some of these contracts are with overseas companies and have to date cost the airline more than R4bn. These would be some of the contracts that the ANC wants investigated.

ANC secretary-general Ace Magashule said this decision was taken following a report on the state of state-owned enterprises such as SAA and Eskom.

SAA, which this week started flight-shedding on one of its international routes, as well as cancelling 28 domestic flights, will be retained as a national carrier.

Up to 38 flights cancelled by cash-strapped SAA

A total of 38 international and domestic flights have been cancelled by the cash strapped South African Airways between yesterday and Friday.
News
1 year ago

"SAA should be retained as a national airline, which will require substantial restructuring," Magashule said, adding that next week's cabinet lekgotla "should take the operational decisions needed to achieve that aim".

The ANC agreed that government support was needed to ensure that the SAA and the other entities remain operational.

As it stands, SAA is under business rescue and is still awaiting a R2bn bailout from the government.

Finance minister Tito Mboweni, who is attending the 50th World Economic Forum (WEF) in Davos, told SABC's Morning Live that they were working tirelessly to secure the R2bn.

"Before I came to this (WEF) meeting now I received a message from the director-general of the National Treasury (Dondo Mogajane) that they are working feverishly to try and secure that funding," Mboweni said.

"It's very important that that happens in a fiscally neutral way because we don't have an appropriations bill that can find an additional R2bn. That has to come from other sources that DG Mogajane is working on."

Government looking for R2bn to save SAA

Government is still looking for R2bn for SAA's business rescue process.
News
1 year ago
Next Article