Up to 38 flights cancelled by cash-strapped SAA 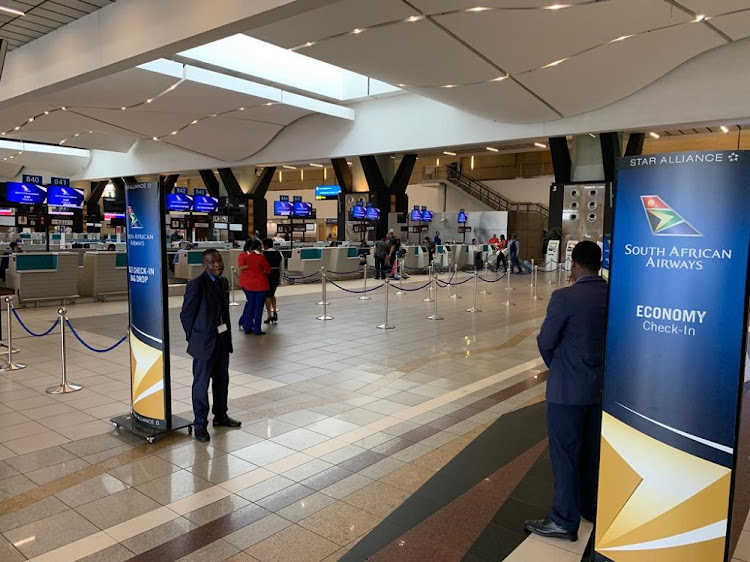 The cancelled flights include ten international flights on the Johannesburg and Munich route as well 28 domestic flights.
Image: Kgothatso Madisa

A total of 38 international and domestic flights have been cancelled by the cash strapped South African Airways between yesterday and Friday.

These includes ten international flights on the Johannesburg and Munich route as well 28 domestic flights between OR Tambo International Airport, Durban, and Cape Town, the airline confirmed on Tuesday.

This, according SAA spokesperson Tlali Tlali, was due to a low demand in the off-peak period and the deteriorating financial crisis the airline is faced with.

“We have now entered into low demand, this is the off-peak travel season insofar as the travelling community is concerned. These are some of the factors in part have affected the numbers that we have of passengers who have booked to fly with SAA,” said Tlali.

South African Airways on Tuesday cancelled a number of its international and domestic flights as the financial crisis at the national carrier ...
Business
2 years ago

The airline is awaiting a R2bn bailout from the government that was pledged when it was placed on business rescue.

“We must be sincere to our customers, members of the public and the stakeholders, it cannot be that we must come out and deny the fact that the events that took place in the last quarter of the last calendar year have not had an impact insofar as the brand of the airline concerned and the decision that we have now taken shows that it is not business as usual,” he said.

Only one stranded SAA passenger was spotted at the airport who was barred from speaking to the media. He said that they took a “tactical” decision to reduce the number of flights they operate daily by transferring some of their passengers to other airlines and also “consolidating” passengers into the same SAA flight that operate on the same route.

Instead of flying two different aircraft between Johannesburg and Cape Town, SAA has decided to merge these passengers into one flight.

“Because we bought four new aeroplanes which are wide body that have a bigger capacity in terms of accommodating passengers, it would not make commercial and operational sense for us to continue to operate two flights one after the other when we can easily replace those two aeroplanes with one aircraft that can accommodate all those passengers".

“[This is] to ensure that our passengers are able to continue to fly to their final destination and we are also able to reduce our operating costs which speaks to the issue around avoiding the deterioration of our financial position,” Tlali said.

SAA cancels flights to and from Mauritius as storm intensifies

SA Airways (SAA) cancelled flights between Johannesburg and Mauritius on Monday due to unfavourable weather conditions associated with tropical storm ...
News
2 years ago

'We are unable to fulfil salary obligations on time': SAA to staff