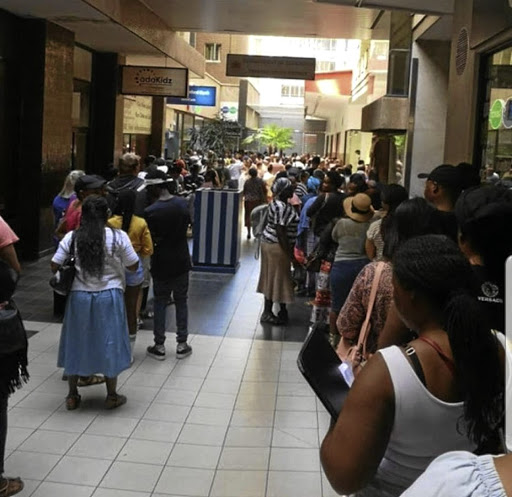 Desperate parents went to the district offices on Sunday and yesterday looking for answers to no avail. / ChefKat-Molefe/Twitter

Parents of over 34,000 pupils who are yet to be placed in public schools for the 2020 academic year in Gauteng have been left frustrated and angry.

But Gauteng department of education has blamed this on parents over subscribing to get space at good performing schools. At least 391 of some of the most-wanted schools are already full to capacity, while there is space not being taken up in 1,900 schools.

At the weekend police had to be called in to diffuse tensions outside the district offices in Ekurhuleni, where parents had been queuing to get space for their children. This was after they were mistakenly sent SMSes to visit their district offices for placements.

According to the department, schools which have reached their capacity include Northcliff high, Parktown Girls, Pretoria High School for Girls and Pretoria Boys high, which all received between 940 and 1,485 applications while available capacity was just under 300. Township schools such as Unity in Daveyton and Bhukulani in Soweto had also reached their full capacity after attracting more than 1,000 applications for available capacity of 150 and 210 respectively.

As a result, 34,553 pupils are without spaces for the 2020 academic year and their parents have until November 30 to settle for what's available.

Parent Tebogo Machaba from Mamelodi, east of Pretoria, said she was unsure where her daughter will find space as her preferred school, Silverton Laerskool, is also full for grade 1s. "I followed the online process like they said, I registered and applied in June but here I am still unsure about where my child will find space," Machaba said.

Machaba was one of dozens of desperate parents that went to the district offices on Sunday and yesterday looking for answers to no avail.

She told Sowetan how officials at the Gauteng South district offices in Pretoria central, locked themselves inside their offices as a large group of parents gathered outside. "It was just chaotic, with parents screaming and shouting and the officials just didn't seem to have answers," Machaba said.

Sonto Khumalo from Ennerdale, south of Johannesburg, said: "I applied on May 20, the status of my application says 'still pending'. I think the problem is that someone is not doing their job." Khumalo said she would "drop off her child at the district offices next year if they fail to allocate me a school in Ennerdale".

Education MEC Panyaza Lesufi has promised to "capacitate" all district offices to ensure they attend to parents.

"I am still shaking and emotionally drained, I don't think parents should be subjected to those conditions," he said.

Lesufi apologised for an incorrect text message which called parents to report at district offices and sparked chaotic scenes. He said 21,000 of those currently without spaces are grade 8 pupils, while 13,000 are grade 1s.

Lesufi said even though there's still pupils yet to be placed, the province has already successfully placed 85% of all legitimate applications received for the 2020 academic year.