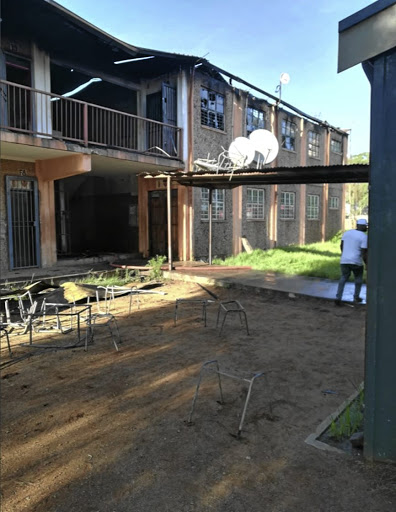 A school in Evaton was torched over the festive season.
Image: TWITTER

Millions of rand are required to fix schools vandalised and damaged by storms over the festive season.

KwaZulu-Natal was the hardest hit by the storms, which left 147 schools damaged. It was followed by Northern Cape, which had six schools vandalised and one damaged by storms.

Gauteng and Limpopo had one school each torched over the December holidays.

KwaZulu-Natal education MEC Kwazi Mshengu said the department will need R408m to fix or rebuild some of the schools damaged by the storm.

"We are trying our utmost best to have our schools functional when they open on Monday. We expect to deliver about 205 mobile classes to the damaged schools around the province," Mshengu said.

Education spokesperson Geoffrey van der Merwe said: "The damages range from the roof, ceiling, ablution facilities and electricity cables. The department will need about R90,000 to fix these damages.

"We had one school in John Taolo Gaetsewe district that was damaged as a result of the storms. Roofing in five classrooms was ripped off and the tiling had to be removed.

Vandalism and theft is costing Gertrude Shope Primary School in Port Elizabeth thousands of rand. As schools are expected to close for the holidays ...
News
2 years ago

"For that the estimated cost of operation is R480,000. The contractors will commence with their work on Monday [today] to ensure that the schools are ready for opening on Wednesday," he said.

"We encourage our communities to take ownership of their schools and report any wrongdoing immediately to law enforcement officers so that perpetrators can be brought to book," Van der Merwe said.

"We have already started to prepare for opening and all lost learner material will be replaced. Teaching and learning will proceed accordingly on the first day of schooling on Wednesday," Mabona said.

Limpopo had one school torched over the holidays. Spokesperson Sam Makondo said its infrastructure section was still working on the financial implication.