'Scammer' paying back his victims while behind bars 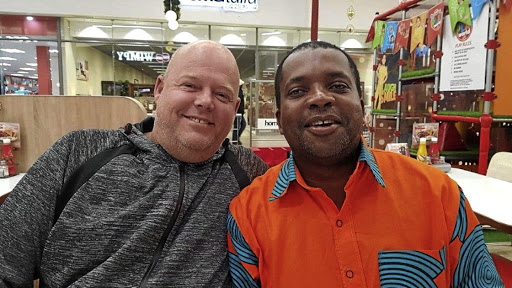 Businessman Anton Greef and Emmanuel Mmbadi, who were victims of a scam by Nigerian national Murphy Ayuk, have been paid back a certain percentage of their monies.

He was scammed R400,000 and left broke and struggling to put food on the table, but Emmanuel Mmbadi may have something to smile about this Christmas.

Mmbadi, 40, was one of SA business people who were refunded a portion of the money they were scammed, allegedly by Murphy Ayuk, a charming Nigerian with a fake American accent, in 2016.

Ayuk had claimed to be a US investment broker and promised potential "clients" loans, but instead allegedly walked off with their money, which was meant to "cover" due diligence fees and other upfront costs.

An agreement has been reached by Ayuk's attorney, Johann Grobler from Johann Grobler & Associates, that the former CEO of Capital Raising Portfolio will refund the business people their monies.

Ayuk was arrested in 2016 after Gauteng businessman Anton Greeff, another alleged victim, opened a case of fraud against him. Mmbadi, a former debtor's clerk, said they (with his partners) had an interest in buying a farm when he was introduced to Ayuk by another client.

"His attorney has transferred some money into my account and we believe that he will be able to honour his promise. I will also be able to pay back people's monies. He also deserves a second chance to redeem himself," Mmbadi said.

Hope Olusegun Aroke pulled off internet scams amounting to more than $1m while serving time for fraud.
News
2 years ago

"I was introduced to Ayuk by a client and he promised to help us raise the R150m but said we needed to pay R400,000. My brother borrowed this amount and I also spoke to a couple of people. I left my work thinking that I was going to concentrate on farming," he said.

Mmbadi said it had been "a stressful journey" for him after he was scammed by Ayuk. "But I am glad he has finally decided to do the right thing," he said.

Greef, 45, who lost R300,000 confirmed that he was also paid part of his money. "He has been punished for [almost] four years in jail already and everybody need a second chance to redeem themselves. I don't see the reason why I should carry on with this case."

He said they now want their case against Ayuk to be withdrawn.

Grobler said: "I can't say much at the moment but we have paid some of the people owed and next week we will pay others."

The agreement reached with people allegedly scammed by Ayuk is that the rest of the amount owed will be paid within 60 months.

NPA Gauteng spokesperson Phindi Mjonondwane said she could not comment on the matter as she was still waiting for more information.

“Pay us our money, Kabomo!”
Entertainment
2 years ago

How to protect yourself against cyber criminals

Cyber criminals are always on the prey, targeting victims through a range of sophisticated phishing techniques that could put your personal and ...
Business
2 years ago
Next Article