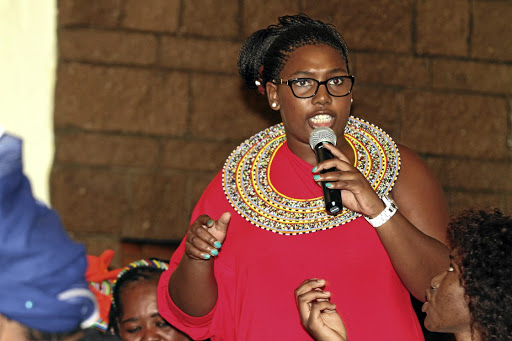 Sunday World can today reveal that Wesbank sent repo men to Conco's address in the expensive suburb of Zimbali in Durban three weeks ago to grab the Toyota Corolla they financed for her.

According to documents seen by Sunday World, Conco, 25, was about R25000 in arrears after she failed to pay her monthly instalment for the car she bought in April last year.

Conco, who this week graduated with a diploma in journalism from Rosebank College, couldn't be reached for comment at the time of going to press as her phone was constantly on voicemail and she did not respond to text messages.

Wesbank spokesman Rudolf Mahoney said they were not allowed to discuss client matters with the media.

The documents state that the former newspaper journalism intern and massage parlour owner financed the car for R203969 in April last year and was supposed to pay R4748 per month in instalments.

Zuma's wife-to-be was a 'bubbly' intern at KZN newspaper

Conco was backer of virginity testing.
News
3 years ago

Conco, whose current balance was just over R202000 was R24474 in arrears as she last honoured her payment obligation on November 15 last year, the documents state.

A banking source, who is close to the account, said Conco called them on April 12 and claimed that she had not paid the monthly instalment because the car was being used by her mother in Matatiele, Eastern Cape.

The mole said Conco was told to voluntarily surrender the car, as they were looking for it, or to pay half of the arrears to avoid repossession.

Conco, the documents reveal, was also the proud owner of a sleek Mercedes-Benz C300 worth more than R600000 that she bought a month before she purchased the Toyota.

Attempts to solicit comment from Zuma proved fruitless as his phone rang unanswered.

His spokesman Vukile Mathabela could also not be reached as his phone rang unanswered. He also failed to reply to a text message.

Zuma's son Edward said: "Does the former president have a new wife? I'm sorry I can't help you because I don't know what you are talking about."

The relationship between Conco and Msholozi, Zuma's clan name he is often referred by, burst into the public space three weeks ago after it emerged that they were blessed with a child together.

According to reports, the child was born on Zuma's 76th birthday on April 12 after she had checked into the Busamed Hillcrest Private Hospital in Durban as "Mrs Zuma".

After being quiet since the story broke, Conco was seen in public for the first time this week when she attended her graduation ceremony in Durban.

Pictures of her at the ceremony showed a happy Conco with a flashy diamond ring, a white doek and a beaming smile.

Nonkanyiso Conco, wife-to-be to former President Jacob Zuma, has resigned from her job.
News
3 years ago
Next Article