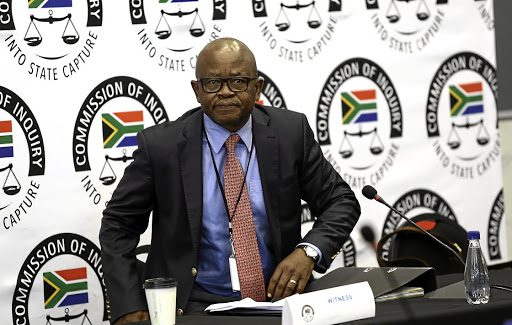 Former CEO of GCIS Themba Maseko was transferred to the department of public service and administration and replaced by Mzwanele Manyi. / Masi Losi

The truthfulness of former president Jacob Zuma's testimony to the state capture inquiry came under question yesterday when Themba Maseko returned to take the stand.

Maseko, who was employed as a director-general at the Government Communication Information System (GCIS) and subsequently the department of public service and administration under Zuma's administration, poked holes into Zuma's testimony at the commission in July. He said parts of the testimony were "untrue".

When Maseko first took the stand in August last year, he said the former cabinet minister Collins Chabane told him that Zuma gave the instruction that he should be booted from GCIS in February 2011.

But when Zuma appeared before the commission in July, he denied that he issued the instruction. The former president said people often used his name if they wanted "bad" things to be done, and Chabane could have done the same if he wanted to get rid of Maseko.

But since Zuma's appearance, other witnesses have since appeared to corroborate Maseko's initial evidence. This warranted Maseko being called back to the stand.

Former president Jacob Zuma will no longer appear before the state capture inquiry next week.
News
2 years ago

"My response is very clear, I think what the former president says in his oral evidence is untrue. There was never an issue between myself and Chabane, we had a very solid relationship and the way he conveyed the message to me indicated that he himself was shocked by the turn of events," Maseko told the commission.

"Chabane had no basis, he had no reason... There was no incident that could have prompted him to decide that I should move. He made the point that instead of throwing me into the streets, he would rather find an alternative post for me in government. It's an indication to me that there was no issue at all between the two of us."

Advocate Kate Hofmeyr, who was leading Maseko's evidence, referred to a letter in the commission's possession penned by Chabane on December 6 2010. The letter refers to Maseko's performance assessment, in which he scored an above average 114%. Chabane recommended that Maseko receive a pay progression for his work.

When Zuma was questioned further about Maseko's transfer in 2011, he said the move stemmed from a cabinet decision on February 2. He said cabinet decided Maseko be replaced with state capture-implicated Mzwanele Manyi.

Hofmeyr said the commission's investigators had approached the presidency and asked for a record of the minutes of that cabinet meeting. She said in the minutes there was no discussion around Maseko's transfer, or a record of any decision taken to have him replaced by Manyi.

Detailing his tenure at DPSA, Maseko said his relationship with then department minister Richard Baloyi "did not gel". In a responding affidavit to the commission, the former minister says he and Maseko discussed the transfer before it was announced, and that Maseko consented to it.

Maseko said he left the public sector five months later because he "found the situation in the department untenable".

"I found there were governance issues, a lot of meetings which happened without my involvement. I was not invited to a lot of the meetings.

"I'm the one who's supposed to go to parliament and account for those decisions. I wasn't able to play the leadership role I was expected to as the accounting officer."

The commission concluded with a complaint from its next witness, Manyi.

Before questions could be put to him, Manyi claimed the commission was attempting to "ambush" him - his objection to testifying reminiscent of his initial appearance last year when he requested that his then evidence leader, advocate Vincent Maleka, recuse himself because his questions were too "prosecutorial".

Manyi said the line of questioning in the subpoena was too broad; that he had not been given enough time to prepare; and that the matters were not part of the commission's mandate.

But Hofmeyr was quick to dismiss his argument, saying the commission's legal team met with Manyi and helped him prepare his affidavit.

Manyi's testimony is expected to continue today. He will be probed on his move from the department of labour to GCIS in Maseko's place.

French arms manufacturer Thales has approached the Constitutional Court to apply for leave to appeal against the reinstatement of corruption charges ...
News
2 years ago

Duduzile Zuma, daughter of former president Jacob Zuma, has come out in support of her father after he was criticised for never having lifted the ...
News
2 years ago
Next Article