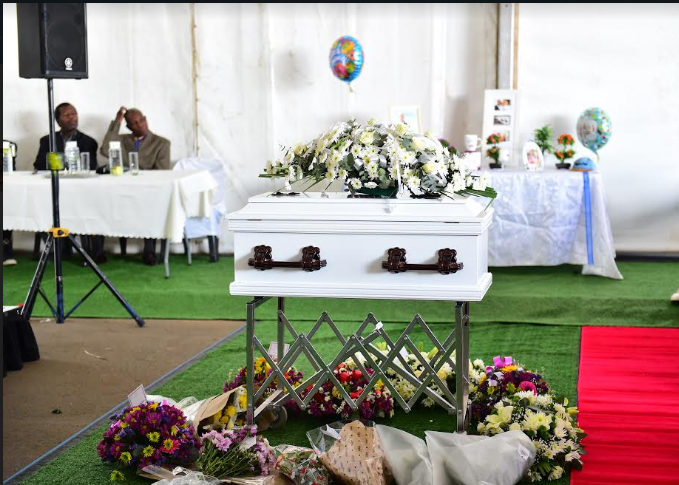 “We will miss you.” These were the words written on two floating balloons tied to a table placed near the coffin of Daveyton toddler Langelihle Mnguni at his funeral on Thursday.

On the same table were pictures depicting happier times for Lihle, whose life was tragically cut short last week when he was killed, allegedly by his nanny.

Despite it being the middle of the week, Lihle was given a huge funeral service with hundreds of people filling a large white marquee erected outside his family home.

Lihle’s body was found inside a storeroom at the home last Friday. According to his family, he had been gagged and strangled to death, allegedly by his nanny who had claimed to have been attacked by intruders. The nanny, who has since been charged for his murder, is currently behind bars pending court proceedings.

Lihle’s white coffin was placed at the front of the marquee where it was surrounded by bouquets and wreaths of flowers brought by mourners.

Seated at the front of the marquee were his grieving, distraught parents, Lerato Mnguni and Sihle Tshabalala.

Dressed in black with blue ribbons tied to their garments, Lerato sobbed as she clutched Sihle’s hand as speaker after speaker took to the podium to offer words of comfort to the family. A large picture of the couple’s son was plastered on the podium.

Lihle’s funeral programme depicted the little boy, dressed in a denim jacket and pants with a little teddy bear placed next to him. 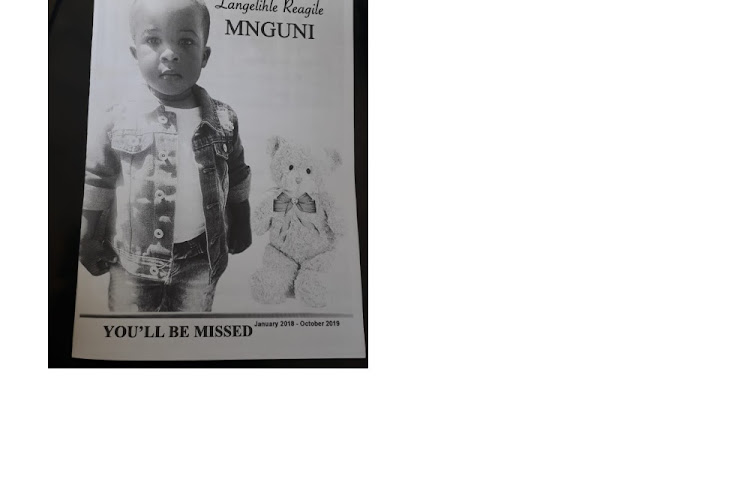 Several of the speakers highlighted the importance of knowing who parents brought into their homes.

“When they say you can never ‘confirm’ a person, this is what they refer to,” said Mr Mavuso [no first name given], the uncle of the grieving father.

“Don’t ever think you truly know someone,” he said.

“But God’s will always comes to pass. Here, a child was innocent and had never done anything wrong but look how things turned out,” he said.

Giving words of advice to the family, Mavuso said: “I cannot say forgive and forget. I can say forgive. But forgetting is impractical.”

Another relative who took to the podium said: “Pray for your nannies. Pray for the people who you open your homes to.”

Lihle will be laid to rest in Crystal Park.

It is every mother's worst nightmare. Leaving your toddler with someone you trust, only to return home to find the child dead and to later learn that ...
News
1 year ago

The toddler's death has thrown into sharp focus what steps placement agencies take to vet potential nannies.
News
1 year ago
Next Article