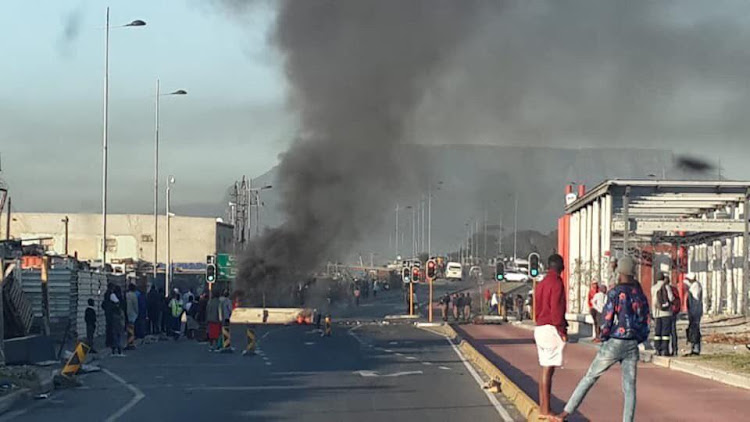 Violence erupted in Dunoon on Thursday.
Image: @Kalushikazi via Twitter

Vehicles were stoned and at least one truck engulfed in flames as violent protests flared up for a second day on Friday in and around Dunoon in Cape Town.

The protests, purportedly a backlash against a crackdown by traffic authorities on errant minibus taxi drivers, caused early morning commuter chaos when the N7 freeway was closed.

Mayoral committee member for safety and security JP Smith said traffic police and metro police had been deployed to help the SAPS contain the violence.

“Due to violent protesting in Du Noon, Potsdam Road is closed in both directions between Malibongwe Road and Killarney Road. This is due to vehicles that are being stoned,” said Cape Town traffic services spokesperson Richard Coleman.

The N7 freeway was closed in both directions between Plattekloof and Malibongwe roads, causing heavy morning traffic congestion. Coleman said a truck had been set alight and others were abandoned in the affected area.

Koeberg Road, not far from the protests affecting Dunoon, was closed in both directions between Racecourse Road and Freedom Way due to violent protests and burning tyres obstructing traffic. There were reports of a MyCiTi bus station being set alight.

Smith condemned the disruption caused to motorists and commuters.

“The unrest started earlier this week – allegedly in response to an operation by our traffic service around minibus taxis,” he said on Friday.

“Taxi drivers and owners believe that they should not be fined or arrested for offences and that the city should engage them first in discussions about these offences. This is a preposterous proposal.

“Public transport operators and owners need to realise that the law applies just as much to them as every other motorist and that they have a larger burden of responsibility than anybody else on the road. Their conduct is a disgrace.”

Traffic officers have allegedly been attacked twice by taxi drivers in the space of a few days along Koeberg Road.

Police were deployed to deal with the protests, assisted by 71 traffic officers and 52 vehicles to manage traffic and clear roads. A metro police department tactical response team was also deployed and would be bolstered by a water cannon, said Smith.

He vowed the city would not “bow to this type of intimidation”.

He called for “extended and intensive lockdown operations around public transport in Dunoon to ensure that the perpetrators understand that selfish, violent and reckless behaviour has legal consequences”.

I don't get it. The police station is literally down the road yet this has been allowed to escalate. Get a bunch of chicks together begging not to be raped and murdered and they call people out of retirement to operate the cannons. #Protest #Milnerton #Koeberg pic.twitter.com/dIwwb85YFV