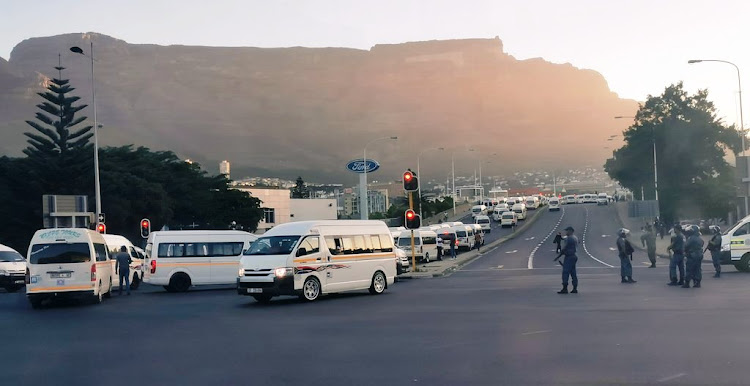 Minibus taxi drivers mistakenly believe they are above the law, says the city of Cape Town.

Mayoral committee member JP Smith hit out at taxi drivers on Wednesday after they staged a protest in central Cape Town on Tuesday evening that led to the assault of a police officer, who was robbed of his firearm.

Passengers were forced out of taxis at the station deck rank and roads were blocked, causing congestion during the afternoon peak period.

Smith said the drivers’ behaviour was deplorable, and part of a new trend of violent reaction to the rule of law.

“It is our understanding that taxi drivers were upset about a warrant operation that was taking place yesterday afternoon, where officers issued ... notices for offenders to appear in court,” he said.

Two traffic officers came under attack from taxi drivers at a Cape Town petrol station on Thursday.
News
2 years ago

“According to reports, their dissatisfaction stems from the fact that they are fined in the first place, as well as the fine amounts.”

“Be that as it may, the actions of the group yesterday cannot be condoned. You cannot break the law with reckless abandon and then cry foul when you are held accountable,” he said. “The law applies equally to everyone and if some are able to abide by it, I don’t see why taxi drivers cannot.”

The west coast suburbs of Dunoon, Joe Slovo and Milnerton were severely disrupted for several days at the beginning of October. Protests started by taxi drivers closed the N7 for several days.

Taxi bosses’ unhappiness at the city council’s alleged failure to grant the Dunoon Taxi Association the licences it sought led to cars being stoned, roads being blocked and infrastructure torched. Five schools were prevented from reopening after the holiday.