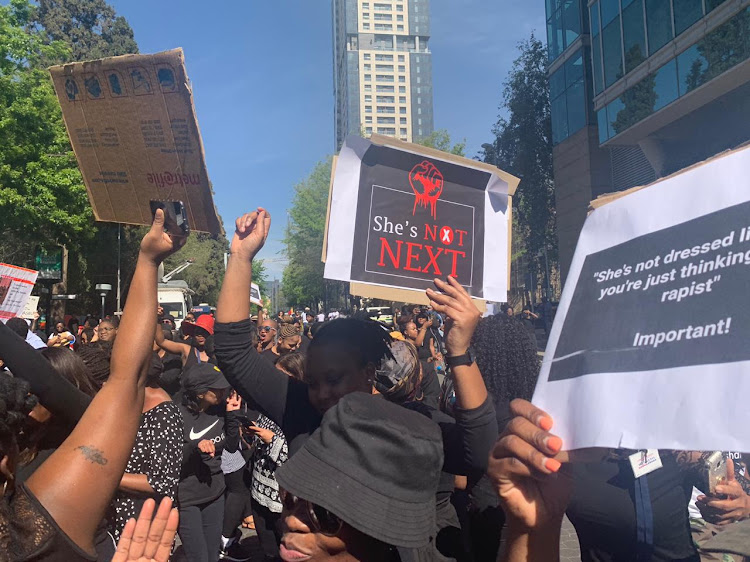 Lucia Mokanyane joined the protest against gender-based violence in Sandton on Friday because she was tired of lying to her daughter.

“It’s heartbreaking because you can never tell her ‘you’re safe’ while you know they’re not safe anywhere," she said.

She was among hundreds of men and women at the march asking government and the private sector to intervene in the killing of women and children.

As a mother, she said, she had to make sure that she and her nine-year-old daughter lived in a country where women and children were protected.

Institute for Security Studies analyst Gareth Newham said the 4.4% increase in rape cases in Gauteng  - alongside a sharp 14.7% rise in sexual assault cases - over the past year was a huge concern.

But some analysts argue the rise in rape statistics could have a positive spin as it meant that more women and children were reporting cases to police.

However, Newham said when looked at in the context of other studies showing that South Africans have less faith in police, it is likely the increases in sexual offences statistics reflect, simply, that more of these crimes are happening.

Dr Shaheda Omar, director of the Teddie Bear Clinic for abused children, believes the increased statistics are a sign the awareness campaigns around rape, sexual assault and child abuse are working.

“It exposes the public to the need for police intervention,” she said.

Professor of policing and forensic investigation at Unisa, Rudolph Zinn, said police had an incredibly important role in curbing rape.

"Improving the SAPS’ investigation techniques and ability to ensure convictions would be a massive deterrent to criminals’ attitudes," he said.

“It’s not something everyone knows naturally. Not to leave children unsupervised, to leave them with capable caregivers, for example,” she said.

On violent offences, Zinn said the increase in Gauteng was typical of a society that had normalised violence as the way to settle disputes.

Mob justice was listed as a major contributor to the murder rate but this has been disputed.

“The vigilantism shows a lack of faith in police, and the sad thing is that often the person who is killed is not necessarily the guilty one,” he said.

For Newham, considering there were 4,495 murders in Gauteng, a sample study of 158 mob-justice incidents recorded by the police is simply not enough to suggest it is a major cause of murders across the province.

The Sandton Stock Exchange was on Friday morning the scene of women's ire at the scourge of  femicide and gender based violence that has swept the ...
News
2 years ago
Next Article