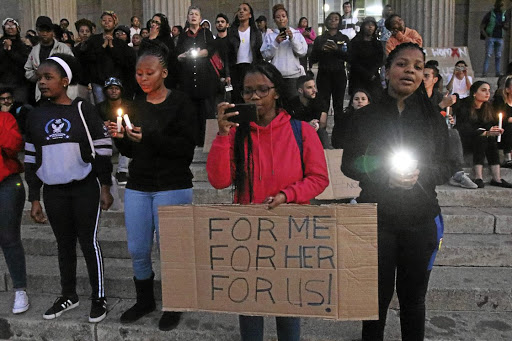 Wits University students hold a night vigil in the campus in protest against the scourge of rape and abuse of women in the country. / ANTONIO MUCHAVE

The vice-chancellors of all 26 South African universities have asked for a meeting with President Cyril Ramaphosa about "an epidemic of incomprehensible violence".

The statement said SA faced "a truly tragic moment in our country's history", adding: "This is not the society we want - the status quo pertaining to gender-based harm must change. We cannot stand back and allow women to be violated.

But they decried the naming and shaming on social media of alleged sex offenders.

"In the past few days there are cases where individuals, including women, have been identified on social media as perpetrators of gender-based harm, with calls for people to congregate outside their homes to intimidate them," the statement said.

"On investigation, it was found that some of these accusations were scurrilous and that these accusers used the current moment opportunistically in order to settle scores on unrelated matters.

"These are the unintended consequences of social media and mob justice - where people abuse a just cause to further their own agendas."

The vice-chancellors also warned of "political forces ... eager to manipulate this national tragedy to fulfil their own agendas - both within and beyond the academic sector, regardless of the rules of universities or the law of the land".

The vice-chancellors said they would approach the presidency "with the view of registering our anger and developing a plan of action for addressing the scourge at universities".

On Monday last week, the court barred the public and media from revealing the identity Uyinene Mrwetyana's alleged killer and rapist until an ...
News
2 years ago

Burst water pipes were the only sign yesterday that anyone had once inhabited the burnt-out ruin that used to be the home of Uyinene Mrwetyana's ...
News
2 years ago
Next Article