Jarod Jackson looked his heavily pregnant fiancée in the eyes, told her he loved her, left and was never seen alive again.

"Just remember I love you," Jackson said to Candice Ellison, as he put on his jacket and walked out of the door in December 2016. Hours after he had left their shared home, Jackson was drugged, strangled and set alight in a car near a small town in the Free State.

Ellison said killers Zak Valentine, Cecilia Steyn and Marinda Steyn taught her a very hard lesson: "You can never look at somebody who has a good job, a house and a car and children in primary school, who speak about God, and know for sure that they are good people."

Jackson was murdered by the trio as part of a plot to claim a life insurance policy taken out by Valentine. His burnt remains were used to impersonate Valentine, whose policy payout would then be claimed by Cecilia.

Cecilia, Marinda, along with her two children, Le Roux and Marcel, and Valentine were eventually linked to the deaths of 11 people as part of a series of killings in the area. The group eventually began killing for financial gain, along with John Barnard, who confessed to being involved in the last seven murders.

Jackson was caught in the middle of one of their schemes.

"I spent the better part of three years numb. I have been totally broken down. I was destroyed knowing that he didn't leave me or walk out, he was taken.

"He was stolen from his daughter and me. We may have not been perfect, but we were in love."

She met Jackson at a psychiatric and rehabilitation centre when she was booked in for her heroin addiction. Jackson was receiving treatment for his own mental issues and drug addiction. After being released, the pair suffered a relapse, lost their jobs, and sought help at the Tower of Life shelter in Krugersdorp.

Ellison said: "Jarod was extremely funny and loved to laugh. He used to crack jokes endlessly.

Jarod was stolen from his daughter and me. We may have not been perfect, but we were in love

"He showed a kindness that was almost foreign to me. He just wanted to help people. Even in the midst of drug addiction, he would show such kindness."

To try to make a living, Jackson started selling chips and sweets outside a private hospital, the Netcare Krugersdorp Hospital.

One day, they had made no money. A desperate Jackson saw two women walking close to the Cosanna flats, opposite the hospital. He approached them and asked them for help. One of the women, who was later identified as Cecilia Steyn, bought all of his stock.

"We thought that we were very lucky that night. We felt that we met somebody who was kind."

On a different occasion when Cecilia saw them in the area, she invited the couple into her apartment at the Cosanna flats for coffee. Ellison said at the flat, they met Marinda Steyn, Zak Valentine, and siblings Marcel and Le Roux Steyn. 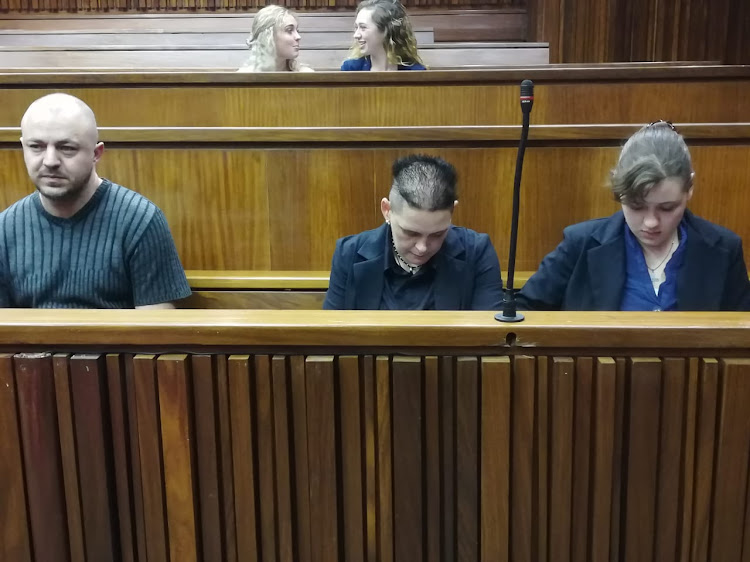 On trial for the Krugersdorp murders are, from left to right, Zac Valentine, Cecilia Steyn and Marcel Steyn. Picture: November 15, 2018
Image: Nomahlubi Jordaan

Cecilia claimed she was a psychologist at Sterkfontein clinic, where Jackson had been treated before. "She seemed to have a lot of intimate knowledge of his (family). She discussed other staff members who were there at the time. Jarod seemed to remember these things.

"They spoke of God, they spoke of how they had all used drugs. Cecilia bragged about how she used 15 grams of cocaine a day and how through God they got over it," Ellison said.

Ellison said they eventually moved into their own place after leaving Tower of Life, but Jackson would still periodically visit Cecilia at her flat.

"I believed that Jarod went back because he still believed that Cecilia had been a psychologist at Sterkfontein. Because of Jarod's mental disability, he felt safe and felt that he could confide in her and talk to her.

Anja - a little girl between the ages of three and four - who had a love for Vanilla milk.
News
3 years ago

On the day of Jackson's disappearance on December 16 2016, she was preparing dinner in the late afternoon when he told Ellison that Cecilia and Valentine had asked for his help.. He never returned.

"I was very, very worried and I sat up the whole night. I walked outside to see if he was on the street. I had a sick feeling in my chest as I watched the sun rising."

Ellison sent Cecilia a message and asked where Jackson was, but she never responded.

Ellison then walked to Cecilia's flat, where the policeman's wife was in tears.

Cecilia said she had been told that Valentine was in a car accident and was in a coma in hospital.

"I immediately asked where Jarod was. Cecilia said Jackson told them he had an errand to run and could not help them, which was why Valentine had left on his own."

Said Ellison: "I was absolutely destroyed at that stage."

She filed a missing person's report, contacted the police, searched the mortuary and phoned Jackson’s family.

A few days later, when she went back to Cosanna flats, Cecilia told her that Valentine had died in hospital and callously lied that Jackson had left her for another woman.

Their daughter was born two weeks after the disappearance.

When the baby was three months old, Ellison was informed by police investigators that the person who had died in the car that had been set alight wasn’t Valentine. Rather, it was her missing fiancé.

She testified against the group who had murdered her fiancé and 10 other people in their criminal trial.

Before she took the stand, she was extremely nervous because she had only spoken to close family and friends about the case prior to that. "I prayed so hard that God would guide my words, that I would be truthful, honest and not afraid."

She said at one stage during her testimony, Valentine smiled at her and winked. This made her more determined.

Marcel Steyn told the South Gauteng High Court on Tuesday that she did not leave the group implicated in the Krugersdorp murders because she was ...
News
3 years ago

Ellison said it was a liberating moment for her.

When she first met her fiancé’s killers, she believed they were a bunch of "normal people", who would hang out at Cecilia’s apartment in Krugersdorp.

She said Marinda, a teacher, would mark test papers. Cecilia would cuddle up on the bed with her children. Le Roux and Marcel appeared to be normal primary school children.

"What (Marcel) did was absolutely terrible and unforgettable, but I believe she had spent many years manipulated and brainwashed.

"I have nothing but sadness for the rest of them - that they had sunk to a stage where they felt it (murder) was acceptable. It is between them and God now."

Ellison now works as a logistics and donations facilitator at a non-profit organisation, The Cradle of Hope, in Krugersdorp. The NPO assists women and children in desperate need of shelter.

She said the biggest lesson she learnt from the ordeal was the value of family and those close to her.

"The biggest lesson I learnt is to value the people in your life and let them know it ... I am moving forward and raising our daughter. I am able to help other women who have been traumatised or are addicts."