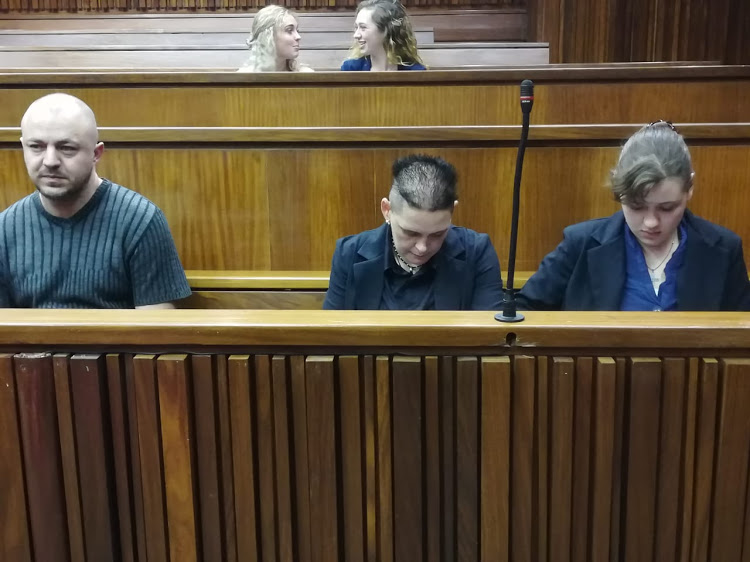 On trial for the Krugersdorp murders are, from left to right, Zac Valentine, Cecilia Steyn and Marcel Steyn.
Image: Nomahlubi Jordaan

Cecilia Steyn‚ one of three people accused of the Krugersdorp murders‚ has denied involvement in any of the killings and that she had claimed to be a satanist.

Cecilia took the stand in the South Gauteng High Court on Tuesday in a case in which she‚ Zak Valentine and Marcel Steyn are accused of the murders of 11 people between 2012 and 2016. All three have pleaded not guilty.

Two others involved in the case‚ Le Roux Steyn and his mother‚ Marinda Steyn‚ 51‚ a former high school teacher‚ have already been sentenced. Marinda was sentenced to 11 life terms for the 11 murders and Le Roux is serving 25 years.

State witnesses who testified told the court that Cecilia had claimed to be the bride of Satan and that she had supernatural powers.

Cecilia had also claimed‚ according to witnesses‚ that her spirit could leave her body. “She was known to travel to the moon. There were no limitations to where she could go.”

Cecilia‚ the court heard‚ also had multiple personalities‚ the ability to turn into a baby or a wolf and could hold her breath under water for an hour.

On Tuesday‚ her lawyer‚ advocate Andre Coetzer‚ asked Cecilia if she was a satanist and she said she was not.

Asked if she was a Christian‚ Cecilia said: “Yes‚ I am.”

Cecilia denied being involved in the production of bombs that were planted at one of the meetings the church group‚ Overcomers Through Christ‚ had held.

This is despite Le Roux’s testimony that they had made bombs at Cecilia’s house‚ which they had later planted at one of the meetings. According to witnesses‚ a number of cars were bombed during the meeting.

'Krugersdorp Killer' accused will deny claiming to have supernatural powers

Cecilia Steyn‚ implicated in a string of murders dubbed the “Krugersdorp killings” will deny claiming to have supernatural powers.
News
2 years ago

“You can’t buy gun powder without a gun licence‚ (I) never tried to buy gun powder. There were no bombs or fire crackers made in my storeroom‚” Cecilia said.

She also denied instructing anyone to make the explosives.

“One night Ria [Grunewald] phoned me when I was at hospital and told me about explosives found‚” she said.

Cecilia denied claims that she had instructed the group to monitor the movements of one of their victims‚ Natacha Burger.

She said she was shocked to hear of Burger’s death

“I was shocked and a little bit confused.”

Cecilia said that there were uniforms at their house which belonged to her policeman husband‚ Dries.

Cecilia disputed Le Roux’s testimony that when the group ran out of money‚ she came up with a plan to have Valentine fake his death so they could claim from his policy.

“No‚ there was never a discussion of Zak faking his death ever‚” she said.

She said she had done Valentine a “favour” by paying his policy premiums to bring them up to date.

Cecilia told the court that Le Roux had implicated her in most of the crimes because he was jealous of her relationship with his sister‚ Marcel.

“We also allowed Marcel to drive the car and not him. He always said that we favoured Marcel.”

Cecilia was adamant that she had had a sexual relationship with Ria Grunewald‚ despite her denying it.

She said Grunewald was very possessive and the relationship had “got out of hand“.

“She told friends of mine not to visit me or visit me when she leaves.”

In her testimony‚ Grunewald told the court that until they had a falling out‚ Cecilia was like a daughter to her.