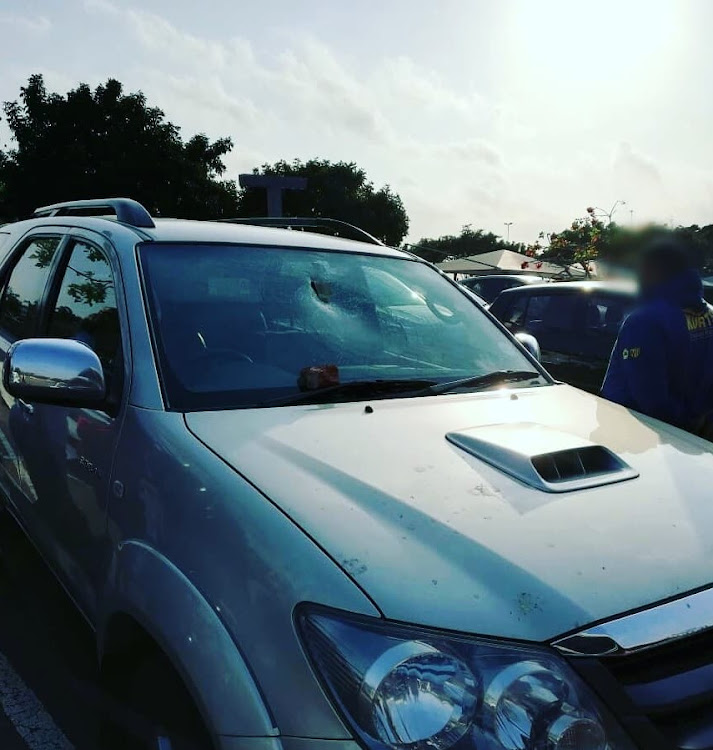 A Toyota Fortuner was damaged when a rock was thrown at the vehicle on the M4 in Durban on Wednesday morning.
Image: Marshall Security

A 27-year-old man was arrested for throwing rocks and damaging two vehicles on the M4 highway in Durban on Wednesday.

Provincial police spokesperson Col Thembeka Mbele confirmed that the suspect was arrested for two separate incidents on the M4, which occurred an hour apart.

"It is alleged that at 6.20am the victim was travelling with his family on M4 south at Umhlanga when an unknown man threw a rock, damaging his vehicle bonnet and windscreen.

"In another incident at 7.30am, a 54-year-old woman was travelling on the M4 north on the off-ramp when the suspect threw a rock, damaging her vehicle windscreen. The driver sustained minor injuries due to the broken glasses and was taken to hospital."

Mbele said the man was arrested after members of Durban North police tracked him down to a taxi rank.

He will appear in the Verulam Magistrate's Court on charges of malicious damage to property.

Rocks being hurled directly at truck drivers is "something new" as a spate of attacks on the "soft targets" plays out on the country's roads - some ...
News
2 years ago
Next Article