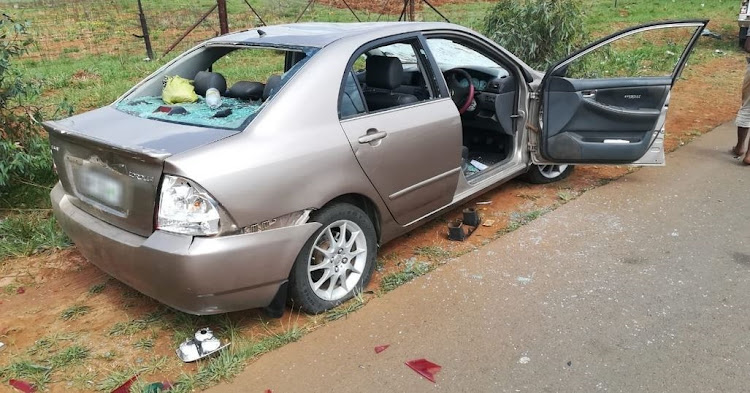 Police on Thursday confirmed that a man was wounded in a shooting emanating from church rivalry in Zuurbekom‚ Randfontein‚ west of Johannesburg‚ on Thursday.

Church members‚ some in their blue and white church uniform and others in the maroon and white‚ who claimed to be from Limpopo‚ Mpumalanga and Mozambique‚ told said that they were driving up to the church premises when they were stopped in their tracks by another faction of the church who had cordoned off the road‚ telling them to go back.

“We found the road closed with several vehicles. We got out of our vehicles to inquire what was happening and we were told that we have no right to be at the church. All of a sudden there were rocks being thrown. We started running once we started hearing the gunfire‚” said one church member from Mpumalanga‚ who refused to give his name.

Some fled on foot‚ while others tried to jump into their vehicles to flee. Asked whether he knew the attackers‚ the church member said: “I can’t say we know them but some of them we know as church members.”

Another church member said that the armed men believed to have been leading the attackers were from a security company.

Meanwhile‚ a man residing close to the church premises told the publication that the first faction of the church members had arrived on Wednesday evening.

“They closed the road with a big truck which belongs to the church. They said 'No one goes in or out'. The second group arrived this morning. Before they arrived‚ at around 7am‚ I heard the singing of church songs‚” said the neighbour‚ who expressed fear at having his name published.

He claimed that the two groups were holding talks when all of a sudden the talking was halted and stones and bullets flew.

“The people who were shooting did not look like church members‚” said the resident‚ who captured the moments prior to the shooting on his phone. “They were heavily armed‚” he said.

A minibus taxi was at the centre of a shooting emanating from church rivalry in Zuurbekom‚ Randfontein‚ west of Johannesburg‚ on Thursday November 1 2018.

Netcare911 spokesperson Shawn Herbst had earlier said that one person was shot in the shoulder while two others were injured during the rock-throwing.

The eyewitness added that the man who was shot had gotten into his car and had been trying to escape when he was hit. He managed to drive a distance away to ensure he was out of further harm’s way despite being wounded.

“The shooters were not running. It seemed like they were not trying to kill them but they were simply trying to scare them away‚” he said‚ adding that the shots ran for about five minutes.

The abandoned vehicles and taxis of the church members had their windows smashed and some of their tyres slashed.

According to eyewitnesses moments later‚ other people from around the area slowly made their way to the abandoned vehicles and began looting clothes‚ bags‚ batteries and radios from the cars.

“The group ran away when the police arrived‚” said the man‚ who pointed to a group of other men a short distance away who still stood‚ facing the direction of the church.

Police had cordoned off a small stretch of road leading to the entrance of the church.

Captain Mavela Masondo said that around 12 vehicles had been damaged.

The war over the multi-million rand estate of the late International Pentecost Holiness Church (IPHC) leader Glayton Modise by his two widows turned ...
News
5 years ago

Meanwhile‚ at a local petrol station just a few metres away from the church‚ men clad in their church uniform continued to gather. Others had soil on the knees of their pants‚ indicating that they may have been injured as they tried to flee the scene.

A church member who had made his way back to his vehicle said that he was still in shock following the incident.

Asked what went through his mind during the shooting‚ the 50-year-old man said: “All I could think about was God. God was with us because they fired many shots but only one person was injured."

“God knows why this happened and He will avenge us‚” he said. Despite this‚ the man said they were not planning on going back home.

“We are going to stay here at the church and pray about it‚” he said.

It was understood that the leadership had on Thursday met to discuss a way forward.

Trouble has been brewing at the church following the death of its leader‚ Glayton Modise‚ in February 2016.

Sowetan has previously reported on disagreements over which of Modise’s children should succeed him‚ with one of them reportedly opening another branch of the church in his name in Lenasia‚ south of Johannesburg. The IPHC is one of Africa's biggest churches with an estimated three million members.