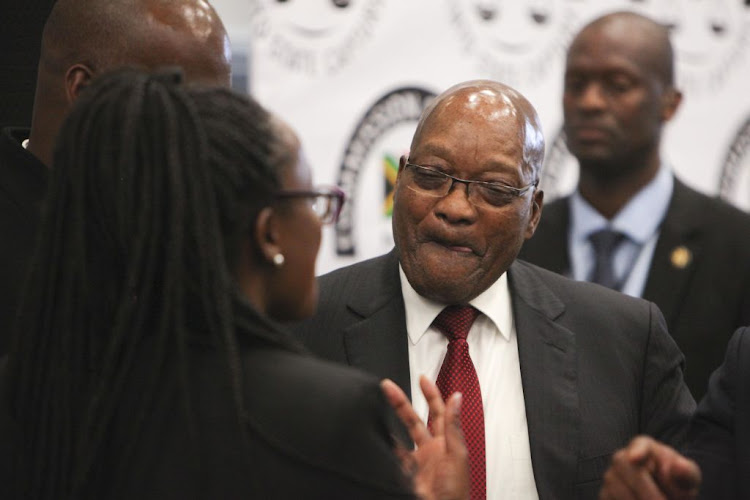 Former president Jacob Zuma threatened his enemies on Friday, after securing a concession on how he is questioned at the state capture inquiry.

The inquiry is looking into allegations that Zuma had allowed cronies to plunder state resources and influence senior appointments during his nine years in power.

Zuma, 77, has long denied any wrongdoing and has ducked and dived in his testimony to the inquiry this week, complaining that he is being questioned unfairly.

"Some say this old man is angry," Zuma told hundreds of supporters from a stage in a park in Johannesburg on Friday after the inquiry was adjourned.

"All I'm saying is people must be very careful. When I say I will say things about them, I mean it." ​

Former president Jacob Zuma will return to the state capture inquiry on Friday after a day-long adjournment in his testimony.
News
3 years ago

Earlier this week Zuma accused a close comrade in the liberation struggle, Ngoako Ramatlhodi, of being a spy for the apartheid government and foreign intelligence services. He said the ANC had been infiltrated by other spies.

Zuma will now be allowed to submit written statements to the inquiry on incidents where other witnesses have implicated him in wrongdoing, as opposed to being questioned by a legal team in public.

Zuma will return to give evidence in public at a later stage, but it is not yet clear when.

"This animal called corruption is amorphous, we don’t know who is actually corrupt,” Sikhakhane added.

Zuma threatened on Friday to pull out of the inquiry but withdrew that threat when his demand for a more lenient form of questioning was granted.

Analysts say that if the inquiry fails to link Zuma to serious wrongdoing, it could dent President Cyril Ramaphosa’s credibility.

Ramaphosa suffered his own setback on Friday when public protector Busisiwe Mkhwebane said he had "deliberately misled" parliament about a donation he received for his 2017 election campaign for the ANC leadership.

State prosecutors are following the Zuma inquiry and could open cases if sufficient evidence emerges.

But Zuma, who was head of intelligence for the outlawed ANC under apartheid, is a shrewd operator who survived several no-confidence votes before his ousting.

On Monday he told the inquiry he had been the victim of a decades-old plot.

He denied that he had done anything unlawful with the Guptas, three Indian-born businessmen who won lucrative state contracts during Zuma's time in power, repeating: "I know nothing."

The Guptas, who have not appeared at the inquiry, have denied that they used their relationship with Zuma to plunder state resources.

This agent is so feared that, not just one, but three intelligence agencies from three different countries conspired to do anything in their power to ...
Opinion
3 years ago

Former president Jacob Zuma is likely to pull out of the state capture commission.
News
3 years ago
Next Article