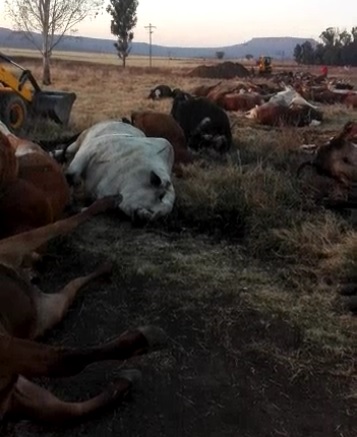 A screenshot of the video shows a row of dead cattle lying on the ground at a farm in Wasbank, northern KZN
Image: Supplied

The National Society for the Prevention of Cruelty to Animals (NSPCA) is investigating an incident at a livestock breeder farm near Dundee in northern KwaZulu-Natal which resulted in the deaths of several hundred head of cattle.

In a video, which has been shared on social media, footage of dead cattle - estimated to number at least 1,000  - can be seen lying on the ground at a farm.

Two excavators can be seen working in the background, digging trenches.

It is unclear whether these trenches were being dug for the purpose of burying the animals.

The NSPCA confirmed to SowetanLIVE on Friday that the incident occurred at a livestock breeder farm in Wasbank, south of Dundee.

"It is incomprehensible that these perpetrators acted without any compassion and tortured these animals, completely disregarding the animals’ suffering."

[WATCH] Dozens of cattle dead at a farm in Dundee, northern KZN. The video has been posted on social media, alleging that 1200 cattle died in the incident. @Kwanalu1 could not confirm the number of cattle that died but said it was related to issues with the feedlot. @TimesLIVE pic.twitter.com/fyF8l3xjc8

De Lange said the NSPCA was shocked and horrified by such attacks on animals.

"We urge anyone with any information relating to this case to contact the NSPCA Farm Animal Protection Unit on 011 907 3590," she said.

The owner of the farm didn't respond to queries about the incident.

Meanwhile in a media statement to SowetanLIVE on Friday, the KwaZulu-Natal Agricultural Union (Kwanalu) confirmed that the incident had been brought to their attention on Thursday.

They claimed it was attributed to issues with the feedlot.

SA has imposed a ban on imports of live animals and related products, including wool, from Lesotho following an outbreak of anthrax.
News
2 years ago

"A video, currently being circulated, depicting the death of a large number of livestock in a feedlot in Dundee, KZN, and attributing the deaths to political motives, is incorrect. We are informed that the feedlot is experiencing a serious problem and that tests are being conducted on the feed mix which has allegedly resulted in a number of animals perishing."

La Marque said that foul play was not suspected and that the video post was being spread to destabilise the farming community.

"We call on all social media users to verify information and not to blindly forward posts," said La Marque.

Kwanalu could not confirm how many cattle had perished in the incident or when it had taken place.

A source with knowledge of the incident said he was aware of "more than a thousand" cattle that had died.