Mpumalanga residents shut down mine 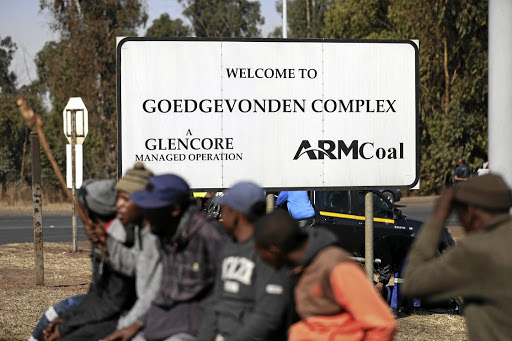 Community members in eMalahleni have forced Goedgevonden to shut down its operations over unfulfilled promises. / Thulani Mbele

Residents of Phosa and Ogies in eMalahleni, Mpumalanga, have stopped operations at one of Glencore's mines after accusing it of reneging on its promise to offer them employment opportunities.

About 500 community members prevented vehicles from entering the Goedgevonden mine yesterday and demanded to engage with the mine's management pertaining to the promises made to them.

Given Yika, 32, said the community had held meetings with management from the mines in the area. "The problem is that we went to the other mines in the area and confronted them about the promises they made to us and they said they would come back to us about our demands.

"But the management at this mine [Goedgevonden] is arrogant, they don't want to talk to us and that's why we are preventing operations here."

The DA says it will initiate a police investigation into allegations that the recently resigned chair of the Central Energy Fund (CEF) tried to ...
News
2 years ago

According to Yika, mines in the area had agreed to employ residents from Ogies and the neighbouring township of Phola. Residents from both areas have been marching to Anglo American's Zibulo Colliery Mine and Klipspruit Colliery Mine since Monday.

"These mines promised that 30% of their staff complement will consist of residents from our areas. They promised that residents would be included in inclusive procurement and skills development, and that they will improve infrastructure in these areas," Yika said.

Another resident, Sibusiso Ntuli, 29, said he was angered by the mine's refusal to engage with them. "I've been living in Phola all my life and I've been seeking employment at these mines since I was eligible to work but I'm still unemployed. We just want to know from them what we need to do to get hired, to get opportunities to improve our lives," Ntuli said.

Glencore Mine spokesperson Shivani Chetram said she could not comment because the issue affected other mines.

Senior Eskom officials were "fooling the system" when a R659m prepayment was issued to the Gupta-owned Tegeta Exploration and Resources in 2016.
News
2 years ago

Agripa Skhosana, chairperson of eMalahleni Joint Structure (EJS) which represents eight townships that have been in talks with the five mining houses, said the community's anger was understandable.

"The mines agreed that vacancies will be communicated with EJS so that we can collect CVs from the communities in order to fulfil their human resources development programme.

"The problem is that some of these mines take long to respond and we have not been kept abreast of developments," Skhosana said.

He said an urgent meeting will be arranged in order to eradicate the confusion and lack of communication between the communities and the mining houses.

Death toll rises to 43 at Glencore mine in Congo after collapse; more expected
News
2 years ago
Next Article