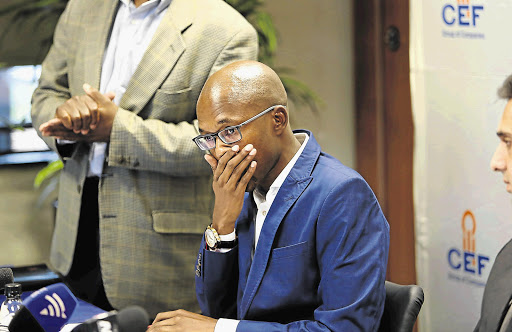 The DA says it will initiate a police investigation into allegations that the recently resigned chair of the Central Energy Fund (CEF) tried to solicit a bribe from oil trading firms on behalf of three senior ANC leaders.

CEF chair Luvo Makasi resigned on Friday - just an hour before he was dismissed for allegedly attempting to solicit a bribe of $2.5m from oil trading firms on behalf of senior politicians and officials, including deputy president David Mabuza.

The Department of Energy insisted on Saturday that minister Jeff Radebe removed Makasi on Friday after “serious allegations that were brought to the attention of the minister”.

But letters seen by SowetanLIVE's sister publication TimesLIVE show that Makasi resigned an hour before his dismissal letter was served.

“On 15 March 2019, energy minister Jeff Radebe removed Luvo Makasi as director and chairperson of the board of the CEF. This followed serious allegations that were brought to the attention of the minister,” the department said in a statement.

Makasi is alleged to have attempted to solicit a bribe of $2.5 million from Glencore and Vitol. The bribe was allegedly solicited on behalf of deputy president Mabuza, Radebe, ANC treasurer general Paul Mashatile and senior officials in the department during a meeting in November 2018.

It is alleged that Makasi asked for the bribe in a meeting with a 'Mr Harvey' so that a court case between the state-owned entity, CEF. and the companies would be resolved.

DA shadow minister of enrgy Kevin Mileham said on Sunday that media reports appeared to imply that Radebe might only have fired Makasi to cover himself. “If this is even a possibility it must be fully investigated,” Mileham said.

“I will therefore lay charges this week in connection with this case, and will present a dossier to the Zondo Commission on state capture, in the belief that it has the top-level investigative power to thoroughly examine what happened.”