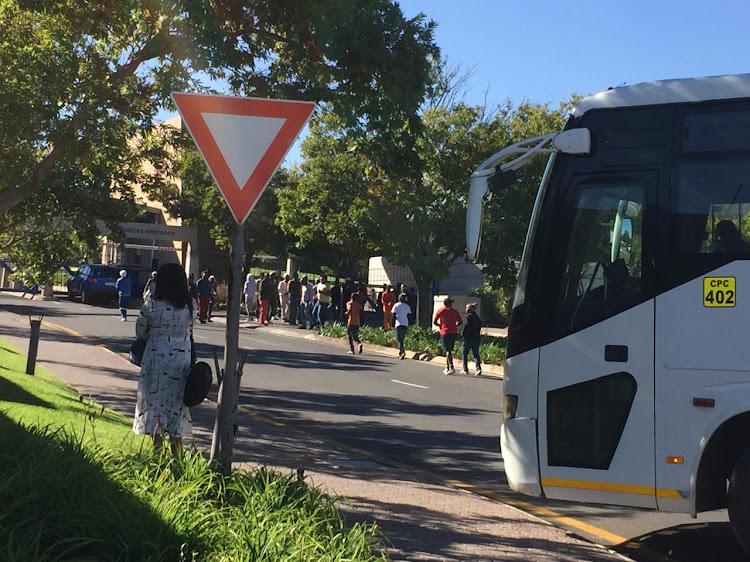 An entrance to Eskom headquarters in Sunninghill, Johannesburg, was closed for security reasons to accommodate protesters from Mpumalanga who want employment.
Image: Jessica Levitt

A group of protesters from Mpumalanga forced Eskom to close the main entrance to its headquarters in Sunninghill, Johannesburg, on Wednesday.

Eskom spokesperson Khulu Phasiwe said the protesters were gathered at the main gate and, for security reasons, management took a decision to close it and asked staff to use the west entrance instead.

"This led to long traffic heading towards the only entrance. Head office has about 3,000 employees coming through to work in the morning. Therefore there was a lot of backlog leading to the west entrance," said Phasiwe.

Phasiwe said the demonstrators had previously come to the Eskom headquarters during lunch time demanding that they be employed at Eskom power stations in Mpumalanga.

They were also demanding that they be considered for coal supply contracts.

Phasiwe said the group of about 50 people were from communities around the Kendal Power Station near Ogies in Mpumalanga.

He said that Johannesburg metro police department officers were directing the traffic.

Western Cape Premier Helen Zille did not mince her words while speaking about the national electricity situation at the Electricity Summit in Cape ...
News
2 years ago

Eskom warned that there is a high risk of stage 1 rotational load-shedding from 5pm to 10pm on Thursday as a result of a "shortage of capacity" due ...
News
2 years ago
Next Article