Police must do more to curb hijackings and murder of truck drivers, says investigator 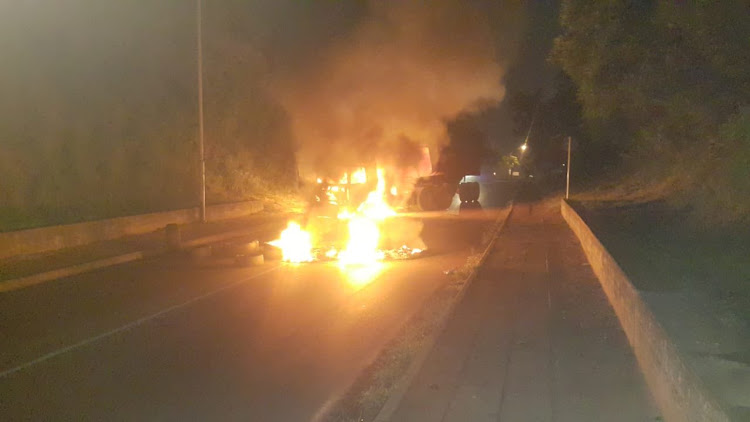 A truck was burnt after a botched hijacking near the Daspoort tunnel in the west of Pretoria in February. A private investigator who investigates incidents on behalf of insurers has called on police to step up its efforts to fight such crimes.
Image: Twitter/@FairyDuRand

Police need to step up their efforts to curb attacks on trucks and truck hijackings.

This is the view of a private investigator and insurance investigator Danie Day at a media briefing by the National Press Club in Pretoria on the impact of criminality in the road freight industry.

The Road Freight Association announced recently that there has been an ongoing onslaught against companies employing foreign truck drivers which has left dozens dead or injured and caused R1.2bn in damage to trucks and cargo.

There has also been damage to other trucks as a result of different protests along the main national routes.

Day said the protection of trucks on the road, which transported more than 80% of goods within the country, was a "government issue".

A truck driver was killed on the N1 near De Doorns in the Western Cape when a rock was allegedly thrown through his windshield on Sunday morning.
News
3 years ago

"Government and police must protect us. We cannot take the law into our own hands. They should [establish] more visible policing on the routes, for the hijackings, and also they must make smaller hijacking units available at different big towns (such) as Bloemfontein, Durban and all over the show," Day said.

He added that although bigger freight companies could employ private security to escort its vehicles, the cost to small companies was prohibitively high.

"Small companies cannot afford to pay for private escorts. You cannot expect to pay R15,000 for guards for escort from Durban to Johannesburg," Day said, adding that the security cost could be the profit that the company makes for that delivery.

Day also said there must be communication between police in different areas to fight the scourge of truck hijackings.

He cited a case where a truck is hijacked on the N3 in Mooi River in KwaZulu-Natal and its driver was released on the N3 near Vosloorus in Gauteng.

Day said while the driver will open the case in Vosloorus, it would take a few days before that case docket is transferred to Mooi River, and the details of the hijacked truck would still not be circulated to all the police stations.

"The hijacked truck will be recovered at the border post, but the person found with the truck will be charged for possession of stolen property."

A long-distance driver who was trying to get some shut-eye in his truck was rudely awakened to find a thief robbing him of his belongings.
News
3 years ago

Day said the police usually did not make connections between the truck hijacked in Mooi River and the the driver who opened the case in Vosloorus.

"There is no communication between different police," Day said

Economist Mike Schussler said the attacks on trucks increased the transport costs for South Africa, and this will in turn lead to an increase in wages in the sector.

Schussler said as the result of the attacks, goods will be in transit for longer periods, and this would affect other industries which are waiting for the goods.

"We are destroying our economy from within," Schussler said.

The next 48 hours will be "critical” for a truck driver who was chased by attackers after they petrol bombed his vehicle while he was resting on the ...
News
3 years ago
Next Article