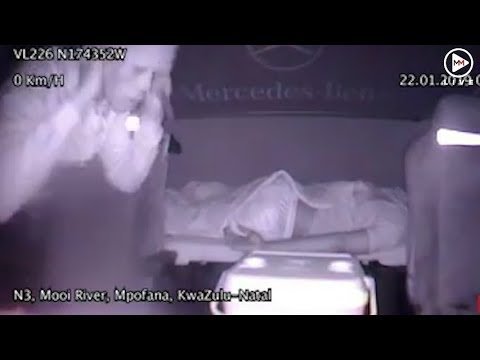 A long-distance truck driver who was trying to get some shut-eye woke to find a thief robbing him of his belongings in Mooi River, KwaZulu-Natal.
Image: Screengrab

A long-distance driver who was trying to get some shut-eye in his truck was rudely awakened to find a thief robbing him of his belongings.

In video footage‚ the truck driver is fast asleep until he is disturbed by the pilferer‚ who grabs some of his possessions lying next to him.

The driver leaps into action and attempts to stop the man by kicking him. The two are involved in a scuffle and a few seconds later the thief runs away.

In video footage, a long-distance truck driver who was trying to get some shut-eye woke to find a thief robbing him of his belongings in Mooi River, KwaZulu-Natal. The incident took place on January 22 2019, at 4.05am. Subscribe to TimesLIVE here: https://www.youtube.com/user/TimesLive

KZN police spokesperson Capt Nqobile Gwala confirmed a case of theft out of a motor vehicle is being investigated by Mooi River SAPS‚ and that two men had been arrested.

"It is alleged on 22 January 2019‚ at 4.20am‚ the truck driver pulled his truck off the freeway when he was approached by two unknown suspects.

"The suspects took a TomTom navigator before fleeing the scene on foot. A 22-year-old suspect was arrested and is appearing today (Monday) at the Mooi River magistrate's court. The second suspect‚ believed to be in his twenties‚ was also arrested today. He will appear in court soon."