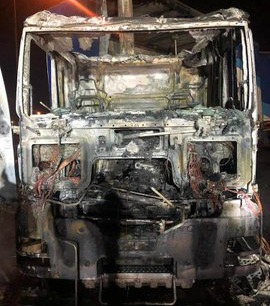 Trucks transporting paraffin were allegedly petrol bombed on the N3 overnight, forcing authorities to close the freeway in KwaZulu-Natal.

“We had two trucks that were torched. We believe that they were petrol bombed while travelling towards Joburg,” provincial Road Traffic Inspectorate spokesperson Zinhle Mngomezulu told eNCA on Sunday.

“They were laden with paraffin and we all know that paraffin is a flammable substance. We had a disaster on the freeway that forced us to close the freeway at least for six hours.”

The drivers managed to escape.

Traffic had to be diverted while the scene was cleared just outside Pietermaritzburg.

Mngomezulu said reports that as many as 15 trucks had been set alight were not correct.

Another truck has been attacked in the last couple of days on KwaZulu-Natal’s highways, this time in Durban.
News
2 years ago

N3TC commercial manager Con Roux said in a statement that in light of recent disruptive protests, incidents of criminality and attempts to obstruct the free flow of traffic on some of the country’s major transport networks, including the N3 toll route, motorists should avoid night-time travel.

“It is advisable to rather plan long distance trips during daylight hours.”

“Disruptive actions by protesters, mostly aimed at the trucking industry, are often opportunistic and unpredictable and mostly occur under the cover of darkness. It is also not limited to a specific area/location or route,” said the statement.

The attack happened within hours of a truck driver being petrol bombed while taking a rest on the side of a freeway in the Western Cape, in the early hours of Sunday morning.

The driver, who was seriously burnt, had to flee for his life and in the process had a petrol bomb thrown at him.