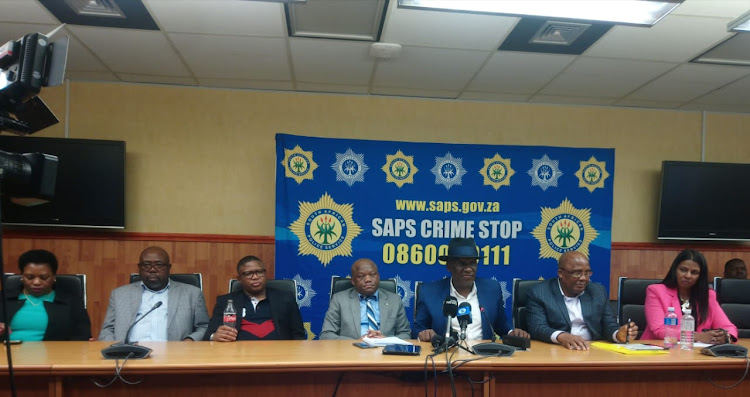 Members of government met in Durban on Monday, June 3, 2019 to discuss the ongoing issues related to the burning of trucks in the country and province
Image: Orrin Singh

The truck was set alight on the N2 on Monday, just north of the Umgeni off-ramp. Metro Police spokesman Snr Supt Parboo Sewpersad confirmed the incident.

Government's call to stop torching the vehicles was made during a media briefing in Durban after four national ministers convened to discuss the immediate - as well as long term - solutions following the latest wave of violent attacks, in which more than 20 trucks were torched throughout the country at the weekend.

The attacks are believed to be related to the hiring of foreign nationals as truck drivers while many competent South African drivers remain unemployed.

Truck on fire on the N2 northbound just after the Umgeni off-ramp. This after four national ministers convened in #Durban this afternoon calling for #TruckAttacks to come to an end. The issue is said to be related to the hiring of foreign nationals as truck drivers @TimesLIVE pic.twitter.com/DvAF4h4qGi

Zikalala said that government was committed to ensuring that the issue was dealt with and that an inter-ministerial task team, comprising of senior officials, would be dealing with the matter and would provide feedback in two weeks.

Cele said the loss of lives and destruction of property had to come to an end with immediate effect. He reiterated that the police would not stand for deeds of “economic sabotage".

“We will let the law take it's course because we cannot negotiate on such acts of criminality," he said.

Cele recognised that the issue of South African truck drivers was a long-standing concern, one which has resulted in 91 arrests.

“These arrests have been looked at as traffic offences but we will escalate this to say that it cannot be deemed as such because traffic offences cannot equate to economic sabotage,” he said.

Pria Hassan of the Positive Freight Solutions Forum (PFSF), representing the majority of the logistics sector in the greater KZN, said they were fully committed to working with government in finding an amicable solution.

A truck driver who pulled over to rest on the side of the highway was seriously injured when he was attacked with petrol bombs in the early hours of ...
News
3 years ago

Hassan said in the last three weeks more than 60 trucks had been torched.

“Our priority is ensuring police visibility on the routes which we have identified as problem areas. We will not tolerate attacks on our people because such acts are moving this country to further economic instability,” she said.

Meanwhile, chairperson of the All Truck Drivers Association (ATDA), Sipho Zungu, said people should not overlook the fact that while they were against the hiring of foreign nationals, they were also against killings and bombings of trucks.

“Companies must do the right thing and give South African's the first opportunities – we are committed to finding a lasting solution,” said Zungu.

The meeting comes exactly one month since government met with members of the trucking fraternity to find resolutions to the ongoing issue, in which it vowed to explore the question of whether truck driving was considered a 'rare or scarce skill' in South Africa.

This after members of the trucking fraternity said that South Africans drivers did not acquire certain skills needed to drive trucks carrying certain hazardous cargo.