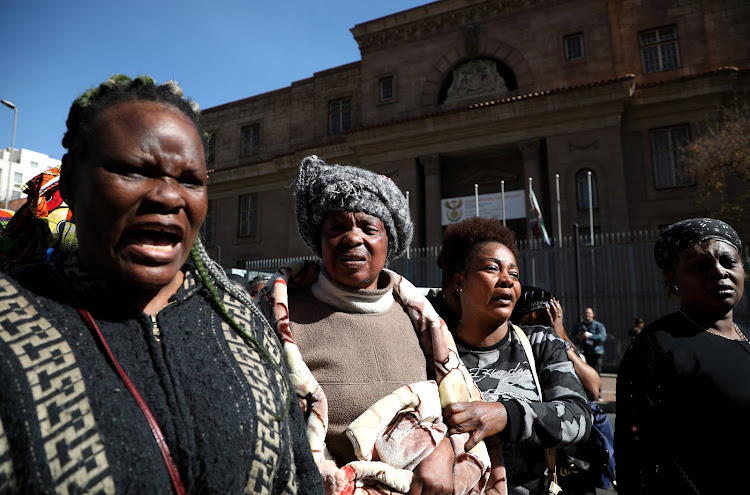 The family of a Forest high learner who was stabbed to death attended the court case of his alleged killer on Wednesday.
Image: Sandile Ndlovu

A 20-year-old pupil who allegedly stabbed to death another pupil outside Forest High School in Turffontein could face 35 years in jail if the court finds him guilty.

He faces one count of murder and two of attempted murder. He cannot be identified as an identity parade has not yet been held.

The pupil appeared in the Johannesburg Magistrate's Court on Wednesday for the murder of a grade 8 pupil‚ Daniel Bakwela.

The National Prosecuting Authority (NPA) said it would not oppose bail of the grade 11 pupil and confirmed he could spend three decades behind bars if found guilty.

"The minimum prescribed sentence applicable to this matter is 15 years for murder and 10 years for each count of attempted murder‚" said NPA spokesperson Phindi Mjonondwane.

The grade 11 pupil is expected to file for a formal bail application on Thursday.

The Criminal Law Amendment Act of 1997 requires courts to impose a prescribed minimum sentences for people convicted of offences such as murder and attempted murder‚ unless compelling reasons justify a lesser sentence.

A mother's cry ripped through the silent neighbourhood of Turfontein in the south of Johannesburg after she had noticed the lifeless body of her son ...
News
3 years ago

According to the act‚ the prescribed minimum sentence for murder is 15 years and 10 years for attempted murder.

Bakwela's mother arrived in court sobbing‚ with her upper body wrapped in a blanket. Scores of pupils also flocked to the courtroom that was packed to capacity.

The grieving mother‚ Antonette Mabiala‚ said she could not stay home but had to seek justice for her slain son.

Bakwela‚ 18‚ was stabbed on Monday along with two other pupils‚ one in grade 8 and another in grade 10‚ who were in court. One of them - who cannot be named due to being a minor - said he wanted justice for his slain friend.

"All we want is a fair judgment‚ for him to serve the maximum sentence‚ because it is not the first time something like this happens‚" said the pupil who survived.

Meanwhile a 26-year-old relative of the accused‚ who asked not to be named after the family had received numerous death threats‚ said it was almost impossible to come to terms with the possibility of her nephew spending more than 30 years in jail.

"It is just sad‚ I mean he's so young‚ but there is nothing we can say or do‚ the only thing I can say is that let the will of God be done‚" she said.

Gauteng education department spokesperson Steve Mabona‚ who was at the court‚ said it welcomed and respected the prosecution's decision not to oppose the bail application.

"It is not for us as a department to point fingers‚ we always respect the justice system‚ we believe they have a valid reason as to why they are not opposing the application‚" he told SowetanLIVE.

Following the stabbing at the school‚ reports of alleged sexual abuse‚ drugs and bullying have emerged. Education MEC Panyaza Lesufi visited the school earlier this week where he was bombarded with complaints of drug usage by concerned parents and community members.

However‚ the department denied allegations of the school being a drug den.

"The school has been incident-free for many years. We have noted the drugs allegations with concern because we have never received any complaints on gang- nor drug-related incidents‚" said Mabona.

Lesufi had called for the school to be closed for 48 hours to allow for thorough investigation and for counselling to be provided to all the affected parties. According to Mabona‚ academic activities are expected to resume on Thursday.