Gang attack claims yet another pupil 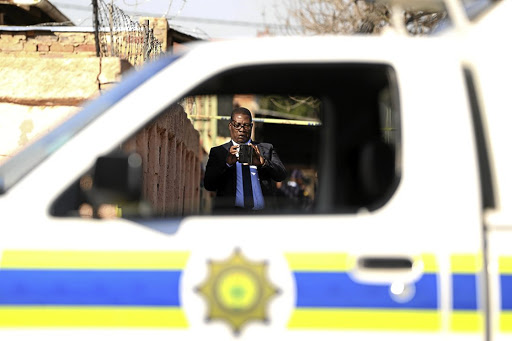 Education MEC Panyaza Lesufi takes a picture at the scene where a grade 8 pupil was killed at Forest High School in Turffontein, south of Johannesburg, yesterday./ Thapelo Morebudi

Those were the words of a distraught Gauteng education MEC Panyaza Lesufi after seeing the lifeless body of 16-year-old Daniel Bakwela, the latest victim of school-based gang violence.

Bakwela, a grade 8 pupil at Forest High School in crime-infested Turffontein, south of Johannesburg, was stabbed to death outside the school in what appears to have been a revenge gang attack.

Two other pupils were rushed to hospital and treated for stab wounds following the attack.

Three hours before the incident, Bakwela's mother Antonette Mubiala had pleaded with her son not to go to school as he was not scheduled to write exams on the day.

On Friday, violence had broken out at the school between two rival gangs. Bakwela and his group, which are known as the STK gang, were attacked and had returned to school yesterday to avenge the attack.

They were armed with sjamboks, stones and sticks. Soon after members of a rival gang, known as the IDV gang, finished writing maths literacy exam, the two groups clashed again.

"A good man, a motivational speaker, a passionate teacher who went the extra mile in assisting learners," are some of the words used to describe a ...
News
3 years ago

One of pupils, a 19-year-old in grade 11, pulled out a knife and stabbed Bakwela and two others.

By the time Lesufi arrived at the school, Bakwela's body was covered in a foil.

Mubiala cried painfully as her elder son, who is also in the same school, tried to comfort her. "Ooh Daniel my son, why kill him? I only had two sons," cried Mubiala.

Bakwela's uncle Raymond Okitai, 38, said when he left home for the school he was his usually bubbly self.

"Little did we know that it was the last time we would see his smile.

At home Bakwela was a good boy who did not talk much.

"We are very disturbed by the news of his passing and we believe that if the ambulance did not take long he could have been saved," Okitai said.

Some angry parents blamed the school for the pupils' bad behaviour. "Every morning you see pupils smoking weed and drinking alcohol just outside the school premises.

"This is not the first time there is a stabbing at this school but nothing has been done about it," said one.

A 16-year-old Limpopo pupil who was stabbed to death by another learner at school was killed allegedly for his friend's cap and R12.
News
3 years ago

A grade 11 pupil said the two gangs were always fighting with each other to prove which group was powerful over the other.

"When the STK's came to the school this morning they started attacking the suspect and his gang with sticks, sjamboks and stones.

"He (suspect) took out a knife and stabbed three pupils from the STKs.

I think he was trying to defend himself," said the pupil who asked not to be identified for fear of victimisation.

The department said exams at the school have been temporarily suspended for 48 hours. "We can confirm this was a gang-related activity. It is sad that we have to dish death certificates instead of matric certificates," Lesufi said.

"The two other pupils who were rushed to hospital were in a stable condition."

The 19-year-old suspect was arrested in Dobsonville, Soweto, yesterday.

One of the six teenagers accused of killing Thoriso Themane told the Polokwane Magistrate's Court on Wednesday that he was acting in self-defence ...
News
3 years ago

Teen 'killer' to be assessed

A 14-year-old boy who stabbed and killed a fellow pupil at a primary school in the North West will be sent for mental evaluation to check his ...
News
3 years ago
Next Article