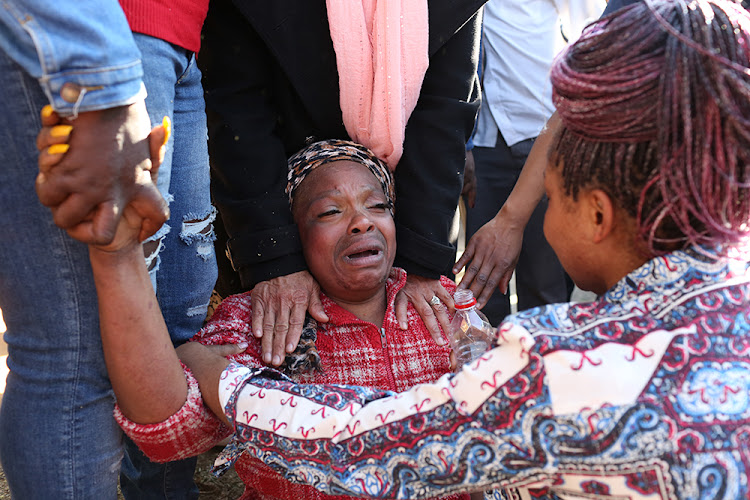 A mother cries after learning her son was stabbed to death outside Forest High School in the south of Johannesburg.
Image: Thapelo Morebudi

A mother's cry ripped through the silent neighbourhood of Turfontein in the south of Johannesburg after she had noticed the lifeless body of her son on the ground and covered in a gold foil.

"Yhooooo Daniel my son, why did they kill Daniel," wailed the mother as she was comforted by relatives.

It is alleged that two other boys in grade 8 and 10 were admitted to hospital with stab wounds last week after a fight between the STK and IDV gangs. The gang fight resumed on Friday and continued on Monday. According to pupils at the scene, the STK gang came to Forest High School with an intention to attack members of the IDV gang.

"They were carrying sjamboks and bricks and the suspect, who was being attacked, took out his knife and stabbed three boys from the STK gang," said a grade 11 pupil.

Police are investigating and no one has been arrested. "We have started with our investigation and have opened a case of murder and two cases of attempted murder. The two are in hospital and are in a stable condition," police spokesperson Captain Mavela Masondo.

Gauteng education MEC Panyaza Lesufi was also at the scene.

Later on the day, a 19 year old pupil was arrested for allegedly killing Daniel.

He was arrested within hours after he allegedly stabbed and injured two more pupils.

Police spokesperson Capt Mavela Masondo said a group of pupils met on Monday at the school and a fight broke out.

"Three pupils were stabbed and the suspect fled the scene but police were able to trace him to Dobsonville in Soweto where he was arrested," Masondo said.

Masondo said the suspect will appear at Johannesburg magistrate's court on Wednesday facing charges of murder and attempted murder.

Two grade 8 learners allegedly stabbed a grade 10 learner to death outside Forest High School in Turffontein, in the south of Johannesburg, on June 2 2019. It is not clear what led to the fight, but according to some pupils it was part of an ongoing battle between two rival gangs. Hours after the attack, the lifeless body of the 16-year-old boy still lay next to the street as pathologists gathered evidence from the scene, watched by family members and friends of the victim. Gauteng education MEC Panyaza Lesufi arrived at the school soon after hearing the news. No arrests have been made.

Panyaza Lesufi, the Gauteng education MEC, said on Monday he had been informed that two grade 8 pupils had allegedly stabbed a grade 10 pupil to ...
News
2 years ago

A 19-year-old pupil who allegedly stabbed a classmate with a spoon to get his lunch is due in court on Monday for attempted murder.
News
2 years ago

A 17-year-old school pupil who stabbed a teacher to death in the Northern Cape was sentenced to 12 years' imprisonment on Monday by the Khathu High ...
News
2 years ago
Next Article