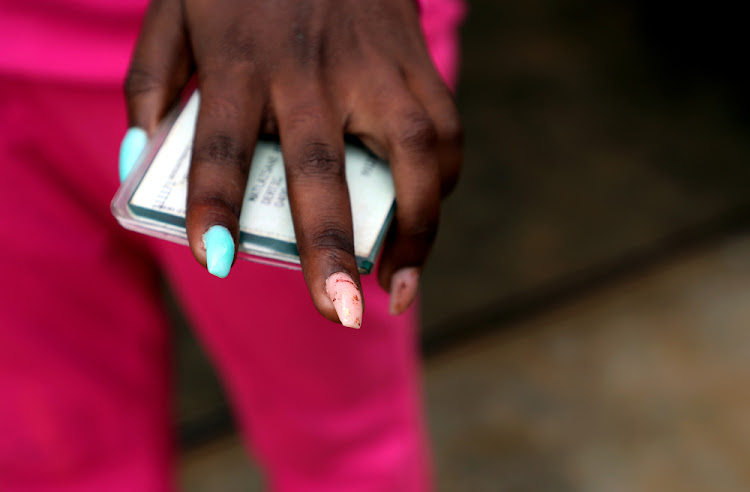 A young woman from Ramaphosa village left the voting station in tears after she was turned back because she had fake nails.
Image: SANDILE NDLOVU

It was just after 6am, and as one drove into the heart of SA's world-renowned Soweto township yesterday morning, one got the feeling that this was indeed elections day.

The usually busy streets and traffic jammed roads were very calm as people who usually head to work around that time were either already queuing up at their various voting stations or at home, preparing to go out at the first sign of daylight.

There were just a few brave souls on the streets, jogging in the icy weather.

Throughout the country, scores of people braved the cold, windy and - in some areas - rainy weather to queue at various voting stations to make their marks.

In the North West province's villages of Ramaphosa, Dertig and Lefatlheng, voters came out in numbers, with some clad in colours of their favourite political parties.

Although many voted without any hassles, a young woman from Ramaphosa village left the voting station in tears after she was turned back because she had fake nails.

Others were made to remove their nail polish before being allowed to vote.

Sowetan witnessed a presiding officer telling a young woman that she needed to remove her artificial nails before being allowed to vote.

Several other women with artificial nails were turned away in some parts of the country, including EFF leader Julius Malema's wife Mantwa Matlala-Malema.

Malema complained to officials at Mponegele Primary School in Seshego, Limpopo, and his wife was allowed to vote.

Boitumelo Maswanganyi, 22, had to use a 20 cent coin to scrape off her nail polish before voting.

"They said the marker won't appear, so I needed to remove my nail polish. I'm just irritated... but I'm happy that I have voted," Maswanganyi said.

Protest at elections is stupid

The ballot box is your most powerful protest available to make a powerful statement.
Opinion
3 years ago

The Independent Electoral Commission is geared up for the fifth administrative election taking place tomorrow.
News
3 years ago

Tsakani Simango, 59, from Lefatlheng village was disappointed to be turned away as she came with a photo copy of her identity document citing that her daughter, based in Pretoria, had her ID.

Nkqubela Ntila, a 48-year-old unemployed man in Mandela informal settlement in Katlehong, Ekurhuleni, braved the rain and a very long queue to cast his vote yesterday.

"I'm voting to end corruption and hopefully after this [election] jobs will be created," he said.

However, some residents from the Joe Slovo informal settlement near Reiger Park, in Ekurhuleni, refused to vote and threatened to set alight those who went to vote.

Law enforcement officers were deployed to the affected areas in large numbers.

Resident Noluvo Manqwazi, 26, from Joe Slovo settlement, said: "We live like pigs here. We have no toilets, lights, no tap water. What hurts the most is that the same ANC that wants our votes has neglected us, so I will not vote."

Manqwazi said they risked their lives everyday as they relied on illegal power connections.

Another resident, Avile Fonqo, 25, who also did not vote, said he did not feel like a South African citizen.

"I live in a smelly place with no waste management and I have no dignity... I live no different from a homeless person," said Fonqo.

Meanwhile, in Soweto, Khanyi Khumalo, who was chilled yesterday having lunch at the famous Sakhumzi Restaurant in Orlando West, said: "I didn't see a reason to vote because all political parties give us false promises.

"The current governing party has done a lot but I am still concerned about young educated people that aren't getting any employment."