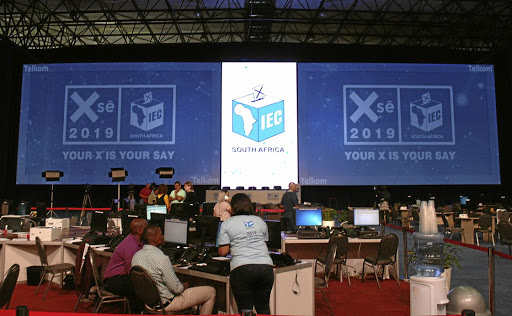 The IEC Results Operations Centre in Pretoria. There will also be more than 28,700 voting stations across the country.
Image: Ziphozonke Lushaba

The Independent Electoral Commission is geared up for the fifth administrative election taking place tomorrow.

Speaking at the Results Operations Centre in Pretoria yesterday, chief electoral officer Sy Mamabolo told Sowetan the two days set aside for special voting will be priming for the election tomorrow.

"The IEC is quite comfortable with the preparation that has been made. The special votes proceeded well, but there were a few community protests in KwaZulu-Natal and the Eastern Cape, but nothing of a serious nature," Mamabolo said.

"We are also using the special vote days to enable the commission to do a dry run so that it can assess and prepare for the actual voting day as much as possible."

To date, more than 200,000 electoral staff have completed training and are ready for the elections tomorrow.

There will also be more than 28700 voting stations across the country.

The Electoral Commission has confirmed that the official responsible for transporting ballot boxes found on the side of a Limpopo road at the weekend ...
News
3 years ago

Mamabolo said the IEC had not yet been informed of political leaders who will not be voting in Gauteng due to for unforeseen circumstances.

ANC acting spokesperson Dakota Legoete said: "From our side, as the ANC, is to co-operate and respect the code of conduct that all of us as parties need to adhere to, to ensure that we protect the integrity of the elections process."

Former president Thabo Mbeki will cast his vote at the Holy Family College in Houghton, Johannesburg.

Ex-president Jacob Zuma on the other hand, will be casting his vote in Nkandla in KwaZulu-Natal. President Cyril Ramaphosa will be voting in his hometown in Chiawelo, Soweto, while Deputy President David Mabuza will vote in Mbombela, Mpumalanga.

ANC secretary-general Ace Magashule will be in Parys, Free State, while deputy secretary general Jessie Duarte and treasurer Paul Mashatile will be in Johannesburg.

Electoral Commission (IEC) workers affiliated to the National Education, Health and Allied Workers’ Union (NEHAWU) will not be downing tools on ...
News
3 years ago

Meanwhile, IEC workers affiliated to the National Education, Health and Allied Workers' Union will not be downing tools tomorrow after all.

Following meetings with the management of the IEC, Nehawu issued a statement saying they had reached an agreement.

"The national union has managed to push the employer to commit to the agreement that was reached at the Electoral Commission National Bargaining Forum (ECNBF) which directed the employer to implement the new organogram by September 1 2019," Nehawu said.

Nehawu had been calling for better wages and improved working conditions for its members, adding that the failure of the employer to hear their grievances had resulted in low morale.

With SA elections around the corner, make sure that you are registered and ready. Unsure about some things? Here are some of the most-asked questions answered by Business Times reporter Mudiwa Gavaza!

Archbishop Emeritus Desmond Tutu was mum after casting his vote at home in Milnerton‚ Cape Town‚ on Monday.
News
3 years ago

The National Education‚ Health and Allied Workers' Union (Nehawu) is meeting with officials from the Electoral Commission on Monday‚ over a range of ...
News
3 years ago
Next Article