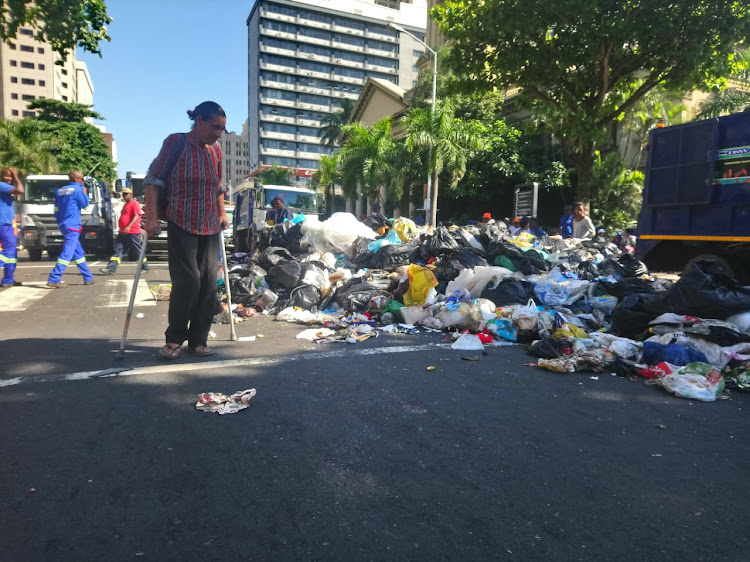 The scene outside the Durban City Hall on Tuesday where disgruntled waste and water municipal employees went on protest over salaries.
Image: Orrin Singh

Two senior eThekwini municipality officials and seven service providers were arrested by the Hawks on Tuesday over an allegedly illegally-awarded R208m waste tender.

In a statement on Wednesday, Hawks spokesperson Brig Hangwani Mulaudzi said the municipal officials Robert Abbu, 62, who is the deputy head of strategy and new development, Sandile Ngcobo, 41, who is the supply chain manager, and seven service providers, were arrested.

They appeared at the Durban specialised commercial crime court. They were charged with fraud and corruption.

He said the Hawks' National Clean Audit Task Team (NCATT) arrested the nine suspects in the wake of ongoing investigations into alleged fraud and corruption at the municipality.

"It is alleged that the municipal officials illegally awarded a R208m tender to four service providers. The Durban Solid Waste tender ran from 2016 until last year. It is claimed the service providers were paid huge amounts of money even though they did not render any service."

Abbu, Ngcobo and one service provider Hlenga Sibisi, 43, were remanded in custody and will make a bid for bail on Thursday.

Mulaudzi said the suspects were ordered not to interfere with the witnesses and not to enter the municipality as part of their bail conditions.

They are expected to make their next appearance in court in August.

National head of the Hawks Lt-Gen Godfrey Lebeya said: "I appreciate and commend the work of the team which has been going on for the past nine months. The work will  continue until all those who played a role in abusing the taxpayers' monies answer their actions in a court of law."

The arrests come in the wake of an ongoing strike by disgruntled Durban Solid Waste employees since 2018, resulting in inconsistent waste collection in several metro suburbs.

Striking eThekwini municipality water and sanitation department employees have vowed to intensify their protest amid concerns that services could be ...
News
3 years ago