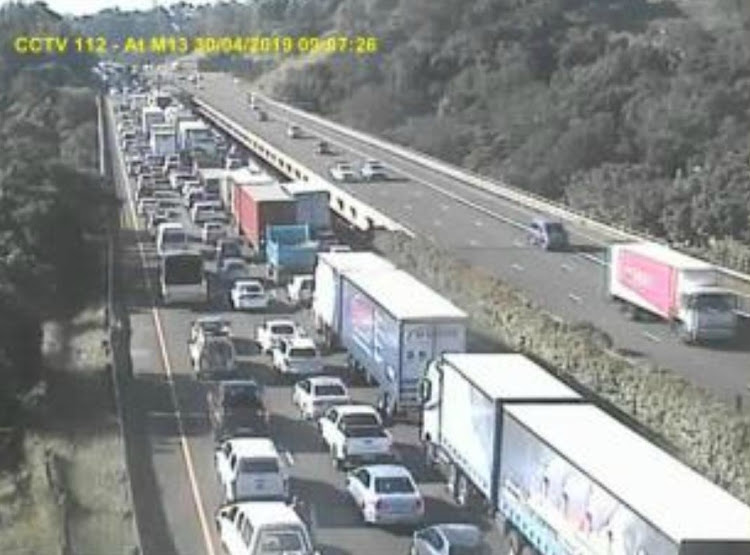 Traffic on the N3 and M13 highways was backed up as refuse truck drivers joined the eThekwini municipal strike.
Image: Supplied

Metro spokesperson senior superintendent Parboo Sewpersad said he could not comment because he was busy dealing with the strike.

According to the vice-chairperson of the Independent Municipal and Allied Trade Union (Imatu), Queen Mbatha, the action was in line with the ongoing water and sanitation dispute.

The municipality said on Monday that it was seeking an urgent court interdict to stop the strike..

Last week, municipal water and sanitation employees downed tools after they demanded answers to what they deemed unlawful promotion of a number of members of the Umkhonto weSizwe Military Veterans' Association.

"Imatu is supporting the employees, who are demanding responses. We too want responses and for the employer to explain to their employees how they will resolve this issue," she said.

#MunicipalStrike parts of the N3 and M13 have been blockaded by eThekwini municipal truck drivers who have embarked on a go-slow. Traffic is heavily backed up entering Durban @TimesLIVE pic.twitter.com/PwTv2AKIa1

In a statement a week ago, city manager Sipho Nzuza said the workers were demanding to be elevated to the grade 10 salary level, which they claimed the MK veterans were receiving.

According to the workers, the MK veterans, who were employed by the city in 2016, were upgraded from grade 4.

"The city is of the view that all human resource processes were followed to the letter. There are internal HR processes that our employees know must be followed in the event they feel there is a need to be regraded," Nzuza said.

Police have been deployed to Blair Atholl road, near Westville in Durban, where angry shack dwellers have once again embarked on protest action.
News
2 years ago

Law enforcement in Pretoria remain on high alert for a planned shutdown on Monday morning.
News
2 years ago
Next Article