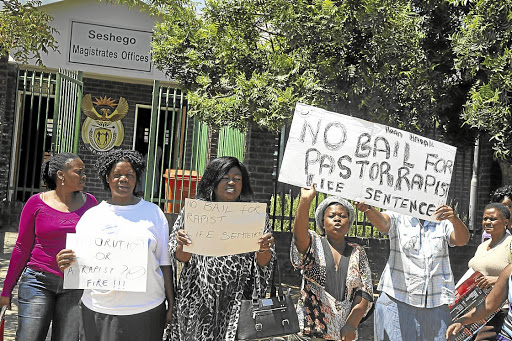 Protesters oppose bail for the pastor accused of rapes in Seshego, Limpopo, in 2012. The pastor, who was given bail, faces two other rape charges in the Mankweng magistrate's court.
Image: Elijar Mushiana

A Limpopo pastor, together with five senior members of his church, will today appear in the Seshego magistrate's court on charges which include rape.

The 57-year-old leader of a church in Seshego, Polokwane, was arrested yesterday on charges of multiple rape, fraud, theft, extortion, assault with intent to do grievous bodily harm, concealment of deaths and kidnapping.

Police said the arrest of the six followed intensive investigations after numerous congregants were severely assaulted inside the church premises.

Motlafela Mojapelo confirmed the arrests yesterday and said investigations were still under way.

"In relation to the concealment of deaths, we have gathered that some of the congregants would go to the church ill, hoping the pastor's prayers would help them heal but they would later die and their burials would be conducted inside the church premises without cases being reported," he said.

Mojapelo added: "The pastor is also suspected of having raped girls as young as 14. More than 40 cases of rape and assault are being investigated against the pastor."

The arrested senior members of the church are aged between 24 and 59, police said.

Police said the pastor had allegedly been on the run since a warrant for his arrest was issued on Wednesday.

He and his co-accused were handed over to the police by their lawyer yesterday.

Mojapelo said investigations started after they received complaints from some of the congregants who alleged that the pastor and his accomplices had been assaulting them severely during church services when they failed to tithe (contributing a 10th of their income).

"Other congregants had to surrender their houses and cars and were told to stay within the church premises."

Mojapelo further said other allegations included extortion of money from pensioners who had just retired from their jobs and received huge pension and provident fund payouts.

He did not rule out the possibility of more arrests and more charges being added.

Meanwhile, the same pastor is scheduled to appear in the Mankweng magistrate's court on Friday on two other rape cases. He'd been out on bail for the 2012 cases.